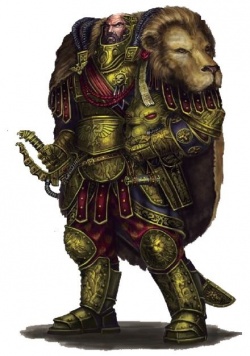 Warmaster is a special military rank of the Imperium and the Imperial Guard. Historically, Warmaster was the title bestowed upon the most favoured Primarch, Horus of the Luna Wolves Space Marine Legion, by the Emperor. The granting of this title was to recognise that Horus was to act as the Emperor's proxy during the latter part of the Great Crusade. Eventually, the Luna Wolves were renamed the Sons of Horus to better reflect the prestige of the Warmaster's title.[4] Now, it stands as the one of the most powerful ranks in the Imperial Guard, second only to the rank of Lord Commander Militant of the Imperial Guard.[3]

Warmasters are created when a Crusade is being planned and resources from multiple sectors are needed. Supreme overall command is necessary as internal strife and corruption might make assembling the material required and co-operating in the field difficult for members of the same rank. The rank is not available unless granted by the High Lords of Terra and such an individual is said to be given the powers by the Emperor himself. There is rarely more than one Warmaster operating within the Imperium at any one time, due to the extreme powers given to them.[Needs Citation]

Other names for this rank include Lord Solar, or just Solar — the title held by Macharius in his crusade at the beginning of the 41st millennium. Some consider 'Warmaster' a cursed title because of the ties to Horus and the Horus Heresy, which tore the Imperium in two. In this light, 'Lord Solar' is considered a more prestigious and desirable title, but fundamentally, the two ranks are interchangeable.[2]