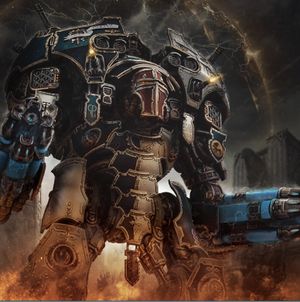 The Warmaster Heavy Battle Titan is among the largest class of Imperial Battle Titan. It is armed with a Revelator Missile Launcher and a pair of Plasma Destructors, meaning there is nothing that can stand up to the Warmaster's devastating firepower.[1]

The existence of the Warmaster was a closely guarded secret by the Mechanicum until Horus Heresy, with even the highest echelons of the Cult Mechanicus not openly speaking of its existence. They were covertly seeded on certain Forge Worlds, kept slumbering and shrouded until a day its home planets very existence was at stake. On that day the Warmaster would stride out, annihilating all of its wake. The first open use of Warmaster Titans came during the Heresy in the Schism of Mars. In the opening phases of the battle the traitorous Legio Mortis revealed its hidden stock of Warmaster Titans, causing devastation to loyalist forces. The Legio Mortis had acquired a number of warmasters due to its alliance with Kelbor-Hal, the treacherous Fabricator-General of Mars. However the Legio Mortis victory was so complete that word of the new Titan would not reach loyalist forces until the Siege of Terra.[2] The exact number of Warmaster Titans that existed prior to the Horus Heresy is unknown, but even the most prominent legions such as the Legio Gryphonicus were only able to field less than a half-dozen.[5]

The Warmaster Titan was based upon an old concept sketch by Jes Goodwin for Adeptus Titanicus.[1]