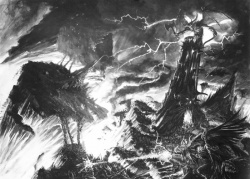 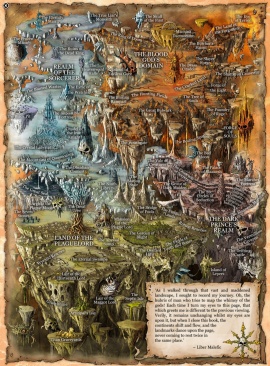 Map of the Realm of the Chaos Gods

The Warp is a psychic dimension parallel to real space. It is known by many names: Warpspace, the Immaterium, the Empyrean, the Ether, the Sea of Souls[10], the Othersea[12a], and also as the Realm of Chaos.[4]

Warpspace is a mirror dimension of pure energy. Existing as a mirror to our own reality, the Materium, it is the domain of the Gods of Chaos.[5] These Gods dwell in their own realms, perpetually battling for one another in a struggle known as the Great Game. The size of these realms expands and contracts as the power of the Warp ebbs and flows.[8]

The Warp's existence is fueled by the emotions and souls of all sentient beings in the Materium.[5] Warpspace is without form and the laws of time and space do not apply there, for both size and time are simultaneously infinite and irrelevant within The Warp.[3] Its energies are in constant turmoil, subject to endless disturbances.[3]

The common analogy used to describe Warpspace compares the Warp to a vast sea of energy, which is subject to constant movement, currents, undertows, etc. Immaterial space and real space bear a relationship as the dimensions parallel with each other. The fact that they share this relationship allows a Warp-capable craft to enter the Warp, carried for a time along the Warp flows until reemerging into real space a distance away from its starting point. The common metaphor used for Warp-jumping compares the Warp to a fast flowing stream. Its motionless banks represent real space. A leaf dropped into the water upstream will be carried along by the currents. This is a useful metaphor in understanding Warpspace, although the Warp is far more complex in its movements than a linear stream. The Warp moves in endlessly unpredictable and convoluted patterns.[3]

The Warp is the final destination of the deceased souls of most races of the Galaxy. These souls will swirl endlessly within the Chaotic eddies of the Warp, and many are consumed by preying Daemons.[4a] The Craftworld Eldar use Spirit Stones to protect their departed souls from becoming the playthings of Slaanesh.[7] While the Harlequin Eldar rely on the protection of the Laughing God.[8] The Imperials believe that the Emperor will protect a virtuious soul once it has entered the Warp.[9]

The Warp is born from the thoughts, dreams, and emotions of every psychically attuned sentient race in the Galaxy. Every emotion and action in the Materium feeds the Warp and it is reflected back, creating its own reality. Should the races of the Galaxy somehow be cut off from the Warp, its malevolent entities would ultimately weaken and starve.[6]

Notable Locations Within the Warp

The Warp is an important factor in the survival of the human race. Spacecraft, capable of voyaging thousands of light-years in a matter of days, travel across the Warp. By such fragile means, humanity is bound together in a single Imperium. The Emperor's will may be mighty, but his reach is long only because Warpspace may be crossed by his fleets.[1]

A spaceship may enter the Warp through the use of Warp drives. This is the means by which spacecraft effectively travel faster than the speed of light. This is achieved because Warpspace is a domain of pure energy, where spacecraft can navigate between streams, as in an ocean. The Imperium uses Navigators, a sub-race of humans, for this purpose. Time also proceeds a great deal slower- or faster- in the Warp than in the material universe, resulting in forms of time stasis, acceleration, reversal, and other chaotic violations of physics. While this solution is effective, it is far from perfect.[3]

Long-distance journeys take months or even years, and the timing itself is unpredictable due to the very nature of the Warp.[3] 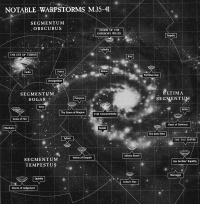 The Warp is an extremely volatile medium. At times, disturbances can turn areas of the Warp into raging storms of incomprehensibly destructive fury. These storms can last for days, months, or even centuries.[2c] Even more devastating are Warp Rifts, which are tears in reality that link The Warp to the Materium. These rifts are highly dangerous and allow the Realm of Chaos to spill into our own.[3] Notable Warp Rifts include the Eye of Terror, Maelstrom, and Great Rift.

The Warp, though utterly hostile to creatures of the material realm, is home to its own form of life.[3] These are often voracious entities which are drawn to the psychic emanations of mortals of real space - these creatures include the Vampyre, Psychneuein, Astral Spectre, Astral Hound,[Needs Citation] Enslaver[3] and most terrifying and numerous of all, the Daemons of Chaos.[Needs Citation]

Ships traveling in the Warp are shielded against attacks from these creatures. Without these shields, travelers through the Warp would be consumed by daemons.[Needs Citation]

The Warp is also the realm of the four Gods of Chaos: Khorne, Slaanesh, Tzeentch, and Nurgle. Though the Warp and the Chaos Gods are formed of the same energy and are practically synonymous, each god has a form that embodies their personalities and dwells at the heart of their realms.[2b]