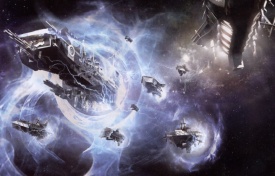 The Warp Drives of the Leagues of Votann are similar in operation, but of more sturdy and reliable design.[2]