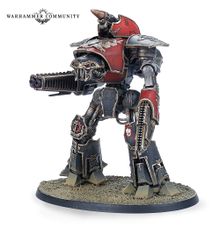 Reaver Titan with Warp Missile mounted on its back

Warp Missiles are special in that, once fired, it will actually travel through the Warp to reach their target. This allows the missile to bypass the Void Shields which protect enemy Titans as they rematerialize on the opposite side of the protective screens - or even within the target itself! However there is a chance that the missile will exit from warpspace at an entirely different point, potentially any location within this or another universe.[1b]