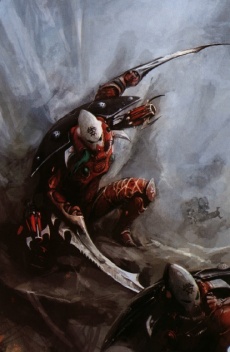 The Warp Spiders are one of the types of Aspect Warriors, Eldar who represent a facet of their war god Kaela Mensha Khaine. Taking their name from the same creatures who protect the Infinity Circuits of their Craftworlds, Warp Spiders epitomise aggressive defense and make use of their teleportation devices to attack the enemy suddenly and disappear before they can retaliate.[1a][2][3] 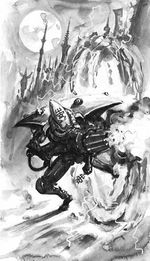 As is true with certain other Aspects there is no known founder, or Phoenix Lord, of the Warp Spider Shrines, although Kaelorian lore speaks of the Lhykosidae, the Wraith Spider, who might be one.[4] Fighting in squads of five to ten members, which sometimes includes an Exarch to lead them[3b], Warp Spiders are deadly warriors who model their weaponry and armour on those of the warp spiders, which swarm and destroy any intruding psychic presence within the Wraithbone skeleton of their Craftworld.[1a][2a][3a]

Jump Generator
The signature piece of equipment used by Warp Spiders is the Warp Spider Jump Generator, a compact device housed within the armoured backpack of their Aspect Armour which allows for short journeys through the Warp. Using this warp-generator Warp Spiders can unexpectedly materialize right next to their foes and fire their ritual weapon, the Death Spinner, which easily slices through flesh and bone.[1a][2a][3a] 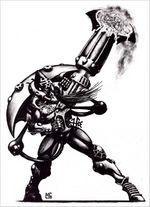 Armor
Warp Spider armour is much bulkier compared to those worn by most other Shrines, making them more heavily armoured but slower. While this would be more constricting for the movements of other Eldar warriors, the Warp Spiders' unique teleportation abilities negates this disadvantage.[1b][2a] The colouration of this armour is traditionally some variation on red and black,[2b] and is further warded to allow for safer travel through the Warp, which provides some protection against psychic powers.[5]

Of all the Aspect Shrines the Warp Spiders are considered the bravest simply for their normal method of operation. Even traveling a short distance through the Warp is a tremendous risk, with not just their lives but their very souls on the line.[3a] Despite this they are also regarded as strange and terrifying, the furthest removed from the normal Eldar mindset of all the Aspect Shrines.[1c] Warp Spiders also tend to have a bleak outlook on life, and rarely mix with warriors from other Aspect Shrines.[6] 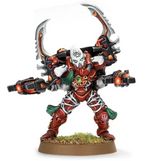 Exarchs are those Eldar who have become lost upon the Path of the Warrior and are unable to leave it, dedicating their whole life to mastering the art of warfare. They wear ancient and more elaborate versions of their Aspect Armour which contain the souls of past Exarchs, granting the wearer their knowledge and a vast pool of raw psychic energy to draw from.

The Exarchs of the Warp Spider Shrines have honed their skills as ambushers to a fine detail and passed on this knowledge to their squad. They are not only experts as surprise assaults, teleporting onto the battlefield in a storm of crackling lightning, but also know the best times to withdraw from combat and set up to perform further hit-and-run attacks.[3a] Some Exarchs will go into battle with two Death Spinners, wielding them as ably as they would a single weapon, or instead carry a Spinneret Rifle. In addition to this ranged weaponry, some Exarchs will also be equipped with Powerblades.[3b]