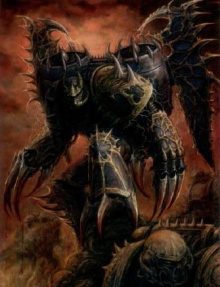 Warp Talons are Chaos Space Marines whose long exposure to the Immaterium has corrupted their physical forms, enabling them to move through the veil of reality and slice between dimensions.

Warp Talons were once part of the Legio Astartes Assault Marine companies, developing their current predatory nature that longs to cut, slash, and cut apart prey. As a result, Warp Talons are capable of striking at their enemies as if appearing from nowhere before slinking back into their nightmarish dimension. Specializing in the close assassination, Warp Talons are most frequently armed with Lightning Claws.[1][2][3]

Having fallen to the powers of Chaos lower then even their Raptor allies, Warp Talons have lost the ability to speak, reason, or create. Thus a pack of Warp Talons is not employed but rather set loose on enemy forces. Chaos Space Marine commanders control Warp Talons by giving them something to hunt, usually by showing them a piece of the enemy to give the hunters their scent, such as hair or clothing. Warp Talons are able to identify their prey while in the Immaterium through the emotional reflection of their victims psyche in the Warp. This allows them to emerge back into reality within direct proximity to their prey.[3] 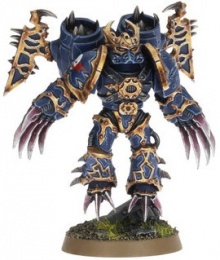