A warp jump is a form of faster-than-light travel around the Galaxy by means of entering the Warp, a parallel psychic dimension, and re-emerging to a new location in real space light years away from the starting position.

A warp jump consists of a ship entering the warp from real space by activating its warp drives to open a tear between realities, traveling the currents of the warp by means of its conventional drives for an appropriate time, and then using its warp drives to re-enter real space at a new position, having bypassed light years of galactic space. This process is known as a jump or hop, and the act of entering or leaving the warp is known as a drop, shift, or translation.[1b] In order to safely utilize the Warp for travel, one must first travel to a System's Mandeville Point. This is the closest distance that a ship can safely enter or exit Warp Space from its intended destination.[8] If one does not travel to a Mandeville Point, they risk having their Warp jump's direction and navigational calculations interfered with by the gravity of planets and other celestial objects.[9]

To make this process difficult, the warp doesn't follow the normal laws of physics and is ever-moving with inconsistent currents and tides, so the exact exit location of long-distance journeys is often unpredictable. Small jumps of up to four or five light years are generally accurate, while longer jumps can be dangerous or a long way off mark. It is safer and easier to travel from some Systems to others where established channels with well-charted warp currents are regularly used for Imperial shipping.[1b]

To add further unpredictability, there are drastic time differences between the warp and real space. Time passes at very variable rates between both realities. Only once a ship jumps out of the warp can it learn how long its journey has taken in real time.[1b] Generally, however, one day in the warp relates to twelve days real time. Sometimes, ships and fleets within the warp can be caught in time bubbles for hundreds of years. This can lead to some strange, but extremely rare, events such as armies being sent across the galaxy to defend a threatened planet only to arrive many years too late, the planet already long lost to enemy forces. There have even been odd accounts of ships going back in time and emerging before they entered the warp. With the nature of the warp, anything is possible.[1a]

Entering the warp can, like many things, further disturb the fabric of the warp. It is said to be like a drop of water landing in a larger pool of water, with ripples coming out in all directions. Often a warp jump can give away the position of a ship, allowing others to home in on the signal.[Needs Citation]

A warp jump can be achieved in two ways - a calculated jump[1b] or a piloted jump.[1a][1b]

A short jump can be carried out by calculating the ship's projected course, corrective maneuvers, approximate journey time, and exit point before it starts the warp jump. While the ship is still in real space, its warp drive has the ability to monitor that part of the warp corresponding to the ship's current position and observe how the warp is currently flowing. But this monitoring can only be done from real space, which means this type of jump is inherently unpredictable as it relies on the warp currents not changing once the ship is in flight, as once inside the warp there is no longer any way the movements can be detected and all the ship can do is carry on blindly until it emerges in real space and hope it arrived in the planned location. Generally a safe distance for this type of jump is up to four or five light years.[1b]

Longer jumps of up to 5,000 light years can be done by steering a ship through the currents of the warp. Only human mutants known as Navigators can do this, as they have the ability to look upon the warp without going mad from exposure to it. Within the warp they can sense the Astronomican, a powerful psychic homing beacon centered on Terra, and use it as a sort of navigational reference aid by judging its distance, strength and position so they can inform the ship's captain to adjust heading when the ship is forced off-course by warp currents. However, piloted jumps still remain unpredictable and dangerous as the Astronomican's power, though immense, is limited to a diameter of about 50,000 light years from Terra, also Warp Storms and psychic phenomena such as the Shadow in the Warp can disrupt and block the beacon.[1a][1b]

Ships coming out of the warp must appear some distance away in deep space or risk destruction among the graviton surges in-system. Because of this many civilised worlds have specific jump points marked by beacons to assist in navigation. An ambushing fleet will often lurk nearby, in the hopes of catching a ship unaware.[6]

One example is given for travel between the Hive World of Proxx and the Mining World of Hephastian. These planets are separated between dozens of light years and a standard voyage in the warp will take one to six weeks. However some voyages have been recorded as taking 1,200 years and another in as little as two minutes. 32% of the voyages have yet to reach their destination.[11]

The warp is populated with many unnatural beasts and chaotic daemons. In warpspace, these creatures have free reign, and an unprotected ship will be subject to their predatations. To combat this, warp-faring species have invented warp-repelling barriers to mount on their ships (the human version being the Gellar Field). These allow races of the material realm to traverse the warp unmolested, however these devices aren't infallible, and occasionally the souls of entire crews are devoured by Chaos.[7]

To reduce dangers, stable Warp Routes are routinely sought after.[10] 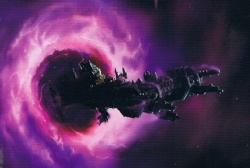 Other ways of traveling through the warp exist.

A warp rift, also known as a warp portal [1b], is a point in real space that interfaces with the warp to form a stable exit and entry point so the use of warp drives is not required. The Enslavers are a race known to use warp rifts to travel between the warp and real space. But the exact nature of how such portals or rifts work is not understood by the Imperium. Sometimes warp rifts occur randomly, other times the Chaos Gods or mortals manufacture them. Some last mere moments, others for days, years, or even centuries. Permanent large-scale warp rifts such as the Eye of Terror and the Maelstrom provide a safe haven for Chaos as well as a gateway for them to attack the galaxy. [1b][5]

The Webway is a series of secret portals and tunnels used by the Eldar and Dark Eldar. Placed a long time ago throughout the galaxy and on Eldar Craftworlds, each gateway is a point in real space linked to another point in real space by a warp tunnel that is protected from the hostile nature of the warp because it exists between the two realities but not entirely in either. Journeys through these tunnels can be made in a fixed time [1b]. The arterial tunnels are large enough to carry spacecraft, though most tunnels only accommodate human-sized creatures or small vehicles.[4]

The Webway is ancient and some passageways and gates are lost and broken. Some have been discovered by the Imperium, referring to them as warp gates, and they become of vital importance to move objects around safely, though why they exist or who constructed them is a mystery. Such gates are of course extremely rare: [1b]

The Tau, because they lack psykers as a race, are incapable of fully entering the warp. However, based on duplicating the warp drive from an unknown alien vessel they have found a way of 'diving' towards the warp, extending the field of their drive into a wing shape designed to hold their vessel in the warp, before being hurled into real space again like a ball held under water and then released. While this is much slower, by a factor of five when compared to Imperial jump speed, it is a lot safer because they do not enter the warp deep enough to become exposed to any of its dangers, and is also much more predictable as their speed works out to a consistent rate. Nevertheless, this limited form of warp travel has resulted in the Tau Empire being closely packed around their home system.[2]

The Hive Fleets of the Tyranids do not travel through the warp but instead rely on small Narvhal bio-ships which are capable of harnessing a planetary system's gravity from immense distances away to create a corridor of compressed-space through which Tyranid vessels can travel towards the system at a swift rate. Whilst slower than proper warp travel, this method is infinitely more reliable. On final approach to a system the Narvhal's delicate senses face interference from multiple gravity sources, and so the fleet must resort to slower conventional propulsion whilst within the borders of a system.[3]