Warriors of Ultramar is the second novel in the Ultramarines novel series by Graham McNeill. It was first published in 2003.

The Ultramarines are the epitome of a Space Marine Chapter. Warriors without peer, their name is a byword for discipline and honour, and their heroic deeds are legendary. The Great Devourer is descending on the world of Tarsis Ultra, a world under the protection of the Ultramarines. Captain Uriel Ventris and his warriors — allied with their barbaric cousins from the Mortifactors Chapter — rally the forces of the planet to defend against the tyranids. But to defeat the xenos horrors, Uriel may have to turn his back on the Ultramarines' teachings and embark upon a dangerous and unorthodox mission. 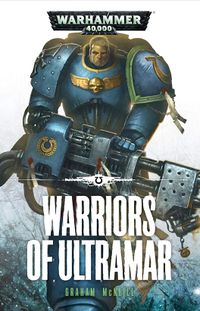