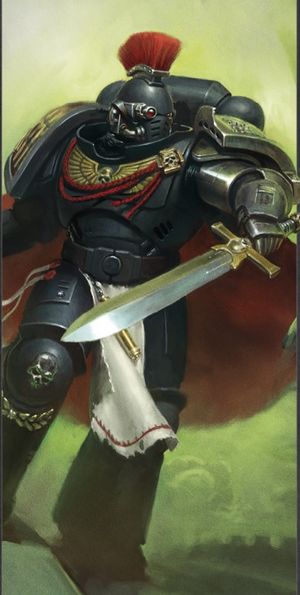 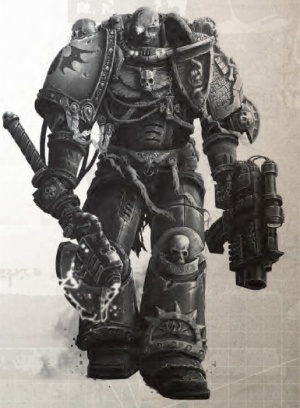 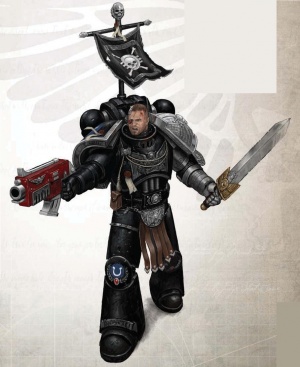 Watch Captains are Adeptus Astartes that belong to the Deathwatch, which is the Chamber Militant of the Ordo Xenos of the Inquisition.[1]

These individuals are often Battle-Brothers who have served in Kill-teams with great distinction and taken multiple tours of service. As such, it is not uncommon for those skilled Battle-Brothers to be called to serve many times with these veteran alien-hunters and given the honour of being awarded the rank of Watch Captain. Those that accept this duty know that they will not return to their parent Chapter for many years as their time as Watch Captain is counted as a single "mission." Their role is to oversee one or more Kill-teams, where they have the duty of watching over every aspect of equipment, recruitment and training. They are also responsible for their Battle-Brothers' record of deeds in battle and ensure, if possible, that the remains of fallen Astartes are returned to their parent Chapter with all due honours. It is unusual for Watch Captains to accompany their warriors on a mission, though they will do so in cases where they face a particularly dangerous foe and where their personal intervention may aid in achieving victory in the battle.[1]

In most cases, Watch Captains oversee missions from nearby posts such as Thunderhawk gunships that are equipped to serve as command centers, emergency surgery, arsenal and quarantine facilities for captured enemies. From the gunship, they are able to monitor the progress of the mission where they are able to see each Battle-Brother's operations by way of multi-band sensors that are built into their power armour. Through this post, a Watch Captain can monitor the physiological condition of his Kill-team which ensures that no Xenos biological contaminants are transmitted to the Imperium upon the return of his warriors. On those occasions when they take to the battlefield, their presence can help turn the tide of battle as a Watch Captain serves as an experienced leader and inspires his men to greater acts of heroism. In addition, they are fearsome warriors who have seen every horror the galaxy has to offer and stood against them all. They are known to stand unshaken before massive alien terrors that are able to devastate entire armies and still determine a weakness in this foe. Watch Captains of the Deathwatch are amongst the most heroic servants of the Imperium, even if their names or deeds are not known by anyone except their Battle-Brothers.[1]

A Space Marine Captain has to be a remarkable individual. He must be a scholarly adept of the teachings of the Codex Astartes and show himself to be an astute tactician through the maelstrom of uncounted battles. He must be a diplomat and act as a representative of the Chapter to Imperial authorities. He must be charismatic hero able to win the confidence and respect of his Battle-Brothers in both triumph and adversity. Under their Captain’s command a company of Space Marines can defeat seemingly insurmountable odds, the individual prowess of the Battle-Brothers magnified a hundredfold when coordinated by the ferocious tactical acumen of their leader.[2]

Space Marine Captains are clear-eyed enough to understand the necessity of the Deathwatch. When the time comes they dutifully set aside their own desires to remain with their company and undertake their Vigil with humility. The Deathwatch traditionally extends the rank of Captain to a Space Marine company commander during their Vigil, but most Captains entering the Watch refuse to accept such a lofty position until they have earned it. Thus, the scarred hero of a thousand battles will accept a role in a Kill-team as a simple Battle–Brother under the command of an individual centuries his junior until he feels he has learned the ropes.[2]

There is wisdom behind the pride of such an approach. A Deathwatch Captain must learn how to fight a new kind of war, a shadow war against opponents on a dozen fronts where a single Kill-team must tip the balance. The methods, tactics and targets of the Deathwatch are best learned in the field, and a Space Marine Captain will stand side-by-side with his Battle-Brothers to learn their way of battle before presuming to take command of them. Deathwatch Captains are also raised from Battle-Brothers that have served in the ranks of the Kill-teams with great distinction and undertaken many vigils in the watch. A particularly skilled xenos-hunter may be called to duty with the Deathwatch repeatedly. Eventually such a renowned Battle-Brother may be afforded the honour of assuming the rank of Watch Captain and leading the Kill-teams he has fought as a part of for so long.[2]

The demands on a Deathwatch Captain are very different to those found in other Space Marine Chapters. A Deathwatch Captain is usually placed in charge of several Kill-teams and given guidance on broad objectives by the Watch Commander. Beyond that and advice from Chaplains and Librarians the Watch Captain sets his own missions and organizes his Kill-teams appropriately. He is responsible for every detail of their recruitment, training, equipment and deployment. It is also his solemn duty to record their deeds in battle and, where possible, to return the remains of a fallen Battle-Brother to their parent Chapter with all due honour.[2]

It is unlikely the Watch Captain will ever have a full hundred Battle-Brothers to command in the Deathwatch, and the handful of Space Marines available will always be widely scattered across the vast area under the scrutiny of a single Watch Fortress. Instead the Watch Captain must learn how to best employ a changing roster of Battle-Brothers from different Chapters to assemble the most effective Kill-teams for the missions required.[2]

Much of the Watch Captain’s time is occupied by endless analysis of data and closeted consultations with Librarians and Inquisitors in an attempt to determine when and where to intervene. It is rare to have the luxury of planning campaigns in the Watch. All too often the Watch Captain is engaged in long-term triage of a series of alien threats across an entire sector. Precision strikes by Kill-teams to keep the enemy offbalance, often in collusion with Ordo Xenos Inquisitors, and some subtle prodding of Imperium military forces in the right direction is commonly the best that can be achieved.[2]

A Watch Captain will often take personal command of important missions, particularly ones that involve multiple Kill-teams or diverse objectives. A Watch Captain makes for a truly deadly opponent but one armed with the ancient weaponry and forbidden wargear available to the Deathwatch is more terrible still. Under his deft control the most diverse Kill-teams work together with the smooth efficiency of a well-oiled bolter. Unconquerable fortresses and indestructible war machines are meat and drink to the fertile mind of a Watch Captain. Even the strongest enemy forces are liable to be pulled apart and defeated at the hands of a Watch Captain’s Kill-teams before they know they are under attack.[2]

When a major xenos threat is identified by a Watch Captain, his role is to formally warn nearby Imperial Commanders of the threat. If the Imperial response proves weak or ineffective it may then fall to the Deathwatch to intervene directly and put an end to the matter. The Deathwatch has access to weaponry that is the doom of worlds. Where conventional defences fail, a Watch Captain may have to sorrowfully order the complete destruction of a planet, potentially sacrificing innocent lives in their billions to protect other worlds in peril. [2]

It is not unknown for Imperial Commanders to beg a Watch Captain to take command of their defences in the event of an alien invasion in hopes of saving their world from Exterminatus. A Watch Captain is a wise choice of supreme commander in such times as their skill and zeal will wring the very best out of even the most lackluster planetary defence forces. It is also a pitiless choice, as a Watch Captain will not hesitate to turn the whole world into a charnel house for the invaders, a devastated war zone piled high with countless dead. Destroying the alien is the Watch Captain’s primary objective; preservation of the world and its people is a secondary concern.[1]

Such dreadful power is also a Watch Captain’s greatest potential peril. A Space Marines’ stalwart character is a proud and ferocious one as befits such a mighty warrior. But in these traits the seeds of damnation can also be sown. Overweening pride can turn to hubris and narcissism; excessive ferocity can beget bloodlust and madness. A Watch Captain can order whole worlds burned with a single word and entire populations slaughtered without fear of censure. The temptation to abuse such power, often with purest of motivations, can be a seductive one.[2]

There is a certain grim hopelessness in the eternal battle against the alien, fighting an unwinnable war against a galaxy full of enemies. The belief that the threat of the xenos must be attacked directly with every weapon available is a form of lurking madness that a Watch Captain must learn to always keep at bay. In truth, the adamantium protecting the flesh of a Deathwatch Captain is weak and brittle in comparison to the unbreakable steel to be found in his soul.[2] 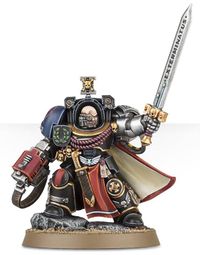