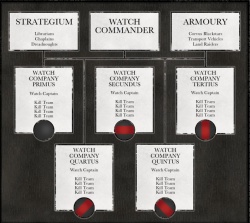 Watch Stations are facilities of the Imperium used by the Deathwatch Chapter (Chamber Militant of the Inquisition's Ordo Xenos).[1a]

These smaller facilities are much more common compared to the larger Watch Fortresses. In size, they are typically no larger than a small escort ship, though others are simple rockrete bunkers on a lonely mountain. These stations are established in order to watch over specific threats or guard a particular location where some have been in place for centuries where they awaited either a time of prophecy or an auspicious reading of the Emperor's Tarot or even a defeated enemy's return is expected. Similar to a Watch Fortress, a Watch Station can take many forms, with a great many serving as sentinels in orbit around a planet whilst others are towers that guard over long dead battlefields. Regardless of shape, they each provide facilities for at most a single Kill-team and the Battle-Brothers stationed at them are rarely left there for any great length of time. This is because of the simple fact that the Deatwatch's resources are too scarce to have all its stations being permanently staffed. However, the simple presence of these facilities allow them to serve as a vital staging point should any threat become apparent and thus they are always stocked with large reserves of arms, equipment and ammunition.[1a]

Though not always manned by Adeptus Astartes, most Watch Stations are homes to skeleton crews of sensor techs and watch-serfs. These individuals spend their entire lives performing their duty and are vigilant for any Xenos threat. At such times, they call upon their masters' aid, thus bringing in the wrath of the Deathwatch against these foes. Most serfs live and die without ever seeing a Space Marine, though all are indoctrinated and condtioned to serve with their watch duty never ending. An even greater number of Watch Stations are not manned at all but controlled by Machine Spirits which is only made possible by the highest acolytes of the Machine God allowing for such rare devices to exist allowing them to be entrusted for such a mission. These automated facilities orbit many dead worlds where their sensors watch over the surfaces below them whilst transmitters trained on distant relay stations.[1a]

Ultimately, the duty of all Watch Stations is to gather information and pass it to a Watch Fortress. Such data can be detailed acitivity logs compiled by watch-serfs or even rare chatter of raw machine language that is sent from never ending tramissions across the void. It is only the most important of stations that are allowed an Astropath whilst others rely on regular visits for these reports to be gathered. In a majority of cases, it is not the reports of alien activity that draw the attention of the Deathwatch but rather the absence of any report at all. Under such circumstances, standard doctrine states that unexpected silence must be investigated immediately with a Kill-team dispatched to stem a possible xenos assault.[1a]

The Deathwatch maintained a number of Watch Stations scattered throughout the Jericho Reach with each serving as a fortified outpost for their operations.[1b]