Watchers in the Dark 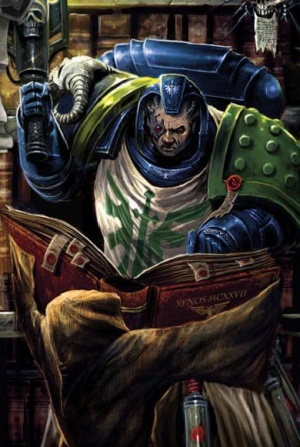 Watchers in the Dark are a diminutive robed[1] race of creatures which inhabit the Rock, the mobile fortress-monastery of the Dark Angels Space Marine Chapter.

The Watchers watch over the comatose body of the Dark Angel Primarch Lion El'Jonson within a secret chamber at the core of the Rock. They are semi-unique as they possess a near exclusive ability to resist the warp entities, a trait which is shared with the rare and mysterious Pariahs who completely nullify the warp around them. These silent creatures have been known to carry Dark Angels weapons to battle, and seem to be immune to all acts of violence. Dark Angels accompanied by them are destined to greatness, but they will never give direct aid in battle.[1]

Despite their usual silence and small stature, Watchers are intelligent creatures who psychically communicate with one another. They have been seeking to guide the Dark Angels against Chaos since before the Horus Heresy, and are acquainted with the likes of Eldrad Ulthran. The Watchers seemed to welcome the coming Destruction of Caliban, viewing it as their last hope in their ambitions against Chaos.[4]

Native creatures to Caliban according to Zahariel, the Watchers in the Dark were encountered fighting Warp-tainted beasts on the world before the coming of the Emperor.[2] According to the Ouroboros, at some point the Watchers became its "jailers". During the power struggle among The Fallen on Caliban as the Horus Heresy unfolded, the Watchers sided with the Lord Cypher against Astelan and Zahariel.[3]

Following the Destruction of Caliban some of the Watchers survived and now inhabit a portion of their former homeworld, The Rock. They continue to aid the Dark Angels chapter in their own mysterious ways.[1] 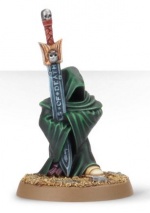 A Watchers in the Dark miniature from GW