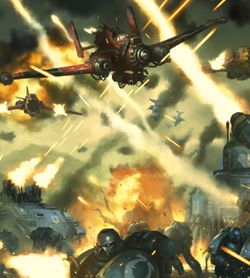 The Wazbom Blastajet is a type of Ork fighter aircraft.[1]

There’s nothing more satisfying to an Ork than going fast, having lots of "dakka", and screaming Waaagh! really loudly. Mastering all three of these aspects, these improvised flying machines are covered in improbable weaponry and piloted by the maddest Mekboyz. Wazbom Blastajets fly in tight mob formations, competing to see who can blow stuff up in the most hilarious manner. The more hapless enemies dissolved by searing energies, teleported into oblivion or hurled through the skies to their messy demise the better – every kill means more scrap for the Mekboyz to gather up and nail to their Blastajet squadrons.[1]

Wazbom Pilots compete to see whose creations can blow up the most targets the fastest, and in the most hilarious ways possible. Their Mek engineers enjoy such contests, for not only are they entertaining, but also allow for more scrap to be collected at the end.[2] 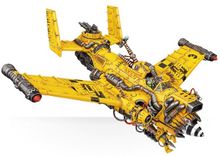