Weapons Platforms are heavy weapons used by the Imperial Guard. Unlike their self-propelled cousins, these platforms must be towed into position, typically by their own dedicated transport which doubles as an ammunition carrier.[1] These platforms are commonly used to defend command posts, forward supply depots, or reinforce battlefield strongpoint.[2] 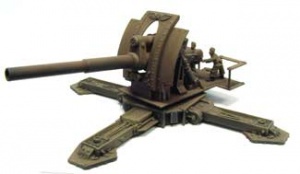 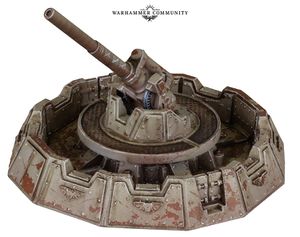 Each Earthshaker Platform mounts the same Earthshaker Cannon found on a Basilisk, on a standard cruciform platform. They are one of the most common weapons used in artillery companies, especially during prolonged static campaigns where they can stay in the same position for weeks battering the enemy. Normally dug-in far to the rear, on occasion an Earthshaker will be brought forward for direct fire in support of friendly forces. Each one is crewed by a team of five Guardsmen in order to keep up a good rate of fire; in a pinch a minimum crew of four can suffice, although this is less than ideal. Only the Trojan support vehicle is powerful enough to tow this platform into position.[1] Each Earthshaker Platform normally has its own Trojan to move it, and also to carry extra ammunition during the prolonged fire missions.[5a] Using standard 5 powder charges, the Earthshaker can reach out to approximately 16 km with a 38 kg shell.[1]

The Earthshaker Platform is also capable of engaging aircraft.[7] 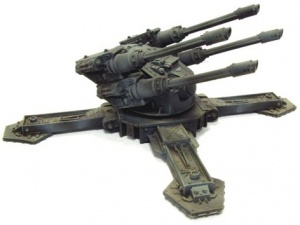 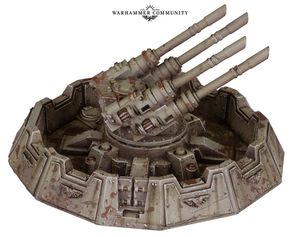 The Hydra Platform utilizes the same quad-autocannon turret as found on the Hydra Flak Tank. They are typically deployed to defend important static targets against air attacks such as bridges, command posts and airfields.[1] Hydra platforms are typically towed into place by Trojan vehicles.[2]

The least common of the weapons platforms, Manticore Platforms are equipped with four Manticore Missiles. This makes them highly versatile and able to fulfill multiple roles, from air defense to offensive bombardment, depending on the warhead with which they are armed. Such is the value of these platforms that it is standard practice to defend a Manticore site with a dedicated squad or platoon.[1] Each platform can be towed into place by a Trojan vehicle.[2] The main Forge Worlds where Manticore Platforms are produced include Voss, Gehenna and Stygies VIII.[5b]