The Webway is a labyrinthine dimension utilised by the Eldar for faster-than-light travel.

This realm's origins are traced to the ancient race known as the Old Ones as a conduit through which they could travel to countless far-flung worlds without suffering from the risk of the tides of the Warp.[2c] It became a tool of this species when they became the first race to cross the vast gulf of stars in a single step and learnt to manipulate alternate dimensions. This quickly led them to attaining a mastery over the use of Webway Portals.[4] It would later be used as a way for the Old Ones to outmanoeuver the Necrontyr during the War in Heaven leading to that race being turned into a minor irritant in the span of a few centuries.[1a] This ultimately changed when the C'tan entered into the war on the side of the now metallic Necron armies. By the closing days of the War in Heaven, one of the C'tan known as Nyadra'zatha had long desired to bring his eldtrich fire into the Webway. The Burning One taught the Necrons how to pierce the boundary of that space beyond space by way of Dolmen Gates whereupon they turned the Old Ones' greatest weapon against them.[1b]

In time, knowledge of the Webway would pass to the Eldar where the technologies used to create it were once taught to them by the Old Ones.[5a] These secret, invisible passageways between the Warp are noted as being ancient constructs and are older than even the Eldar know.[9] The ancient Eldar discovered that it was possible to move through within its threads.[2c] From the many secrets of the Warp taught to them by the Old Ones, the Eldar created a pan-galactic network of navigable tunnels.[3] It was the ancient Eldar who mastered the original Webway network.[2c] At the height of their empire, they used it to travel thousands of light years safely yet quickly and linked all their worlds. Their starships were thus able to move from one end of the galaxy to the other without entering realspace.[3] By M18, the Eldar empire established Commoragh as its primary nodal port within the Webway.[2d] In this age, the leaders of the excess cults are known to have relocated their power bases into the Webway where they could command entire sub-realms.[2a] This pattern of behaviour continued between M25 to M30.[2d]

According to legend, a map of the Webway is known to have been made many thousands of years ago and resides in the Black Library of Chaos. The map contains many secret ways that are long lost or forgotten, though it is not believed to be entirely accurate in later years.[5b] Much of the Webway was either destroyed or damaged during the Fall of the Eldar.[3] The energies of the Fall are known to have ruptured the hyperspatial pathways of the Webway in countless places.[5a] Despite the damage, the Webway still maintains a link between the Craftworlds, though portions of it have been breached by the Realm of Chaos, and have made these parts impassable. The Eldar are known to combat this intrusion of Chaos into the Webway.[3] Those Eldar that survived within the depths of the Webway eventually became known as the Dark Eldar who made parts of it their home.[2b]

The Webway in the current age has drastically changed compared to its original form as it has been torn apart by both disaster and war.[2c] During the Great Crusade, the Emperor created the Golden Throne on Terra as a means of entry into the Webway in order to remove the Imperium's reliance on Warp travel and astrotelepathy. This plan involved constructing a new short section into the Webway and linking it into the abandoned Eldar network.[8] After the psychic disturbance caused by the ill-fated attempt of Magnus the Red to warn the Emperor of Horus's betrayal prior to the Horus Heresy, the human-built sections of the Webway were invaded by Warp entities. Since that time, a psyker has needed to remain on the Golden Throne and hold the portal between the Webway and realspace. The Emperor fulfills this role.[Needs Citation]

The White Scars Space Marine Chapter believes that their Primarch, Jaghatai Khan, is lost somewhere in the Webway, forever cursing the Dark Eldar that lured him into it, although after 9,000 years of wandering, it seems unlikely.[Needs Citation] 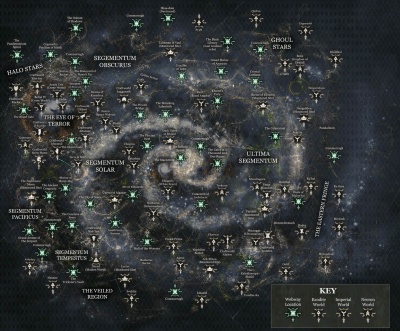 Webway entrances in the Materium[14]

The Webway exists as a labyrinth between the Materium and the Warp. It exists as a part of both yet existing in neither.[5a] In fact, it has been described as not being a true dimension but instead a complex network of capillaries and arteries. This forms a maze of glowing tunnels making a tapestry of hidden threads that spread between the veil of realspace and warp space. Ultimately, it is a construct that spans the dimensions.[2c] Elements of its construction include complex psychic wards to protect it from being breached[3] and hyperspatial pathways.[5a] Present day Eldar do not fully understand the exact shape or form of the Webway.[5b]

In the shattered portions of the network exist dead-ends, mazes that trap the unwary, abandoned or destroyed pathways and some even inhabited by Daemons. The doorways into these parts are sealed with runes of power in order to prevent whatever unknown horror populating them from gaining entry into a Craftworld.[5a] Knowledge of a Craftworld's placement within the Webway is a secret kept by its Seers.[5b]

Artificial portals into the Webway such as those offered by the Dolmen Gates are not stable nor easily controllable. In addition, the Webway itself manages to somehow detect these breaches in its hallways and seal these infected branches off until the danger has passed. Any travelers in these portions can face destruction as the network attempts to correct the breach.[1b]

The Webway was used to connect the Eldar Empire in space, but it was also theorized that it stretched forwards and backwards in time. However, fearful of the consequences, the Eldar never experimented with the Webway's temporal aspects.[15a] The more enigmatic Harlequins say that there are remote locations within the Webway where the flow of time seemingly goes in reverse or does not flow at all.[10] The location in the Webway where time flows backwards is known as Uigebealach. The location in the Webway where time does not flow is known as the Crossroads of Inertia.[10a] Inquisitor Bronislaw Czevak has theorized that constant travel through the Webway is partially responsible for the Eldar race's longevity. Czevak himself spent several decades in the Webway, which reversed his body's aging by several centuries.[13] 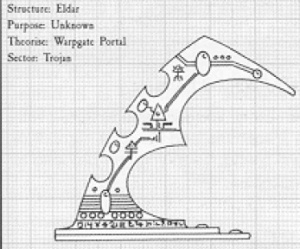 Through large arterial passages, spacecraft are able to journey into the Webway and allow the Eldar to move throughout the galaxy in order to wage war. Most such tunnels, however, can only allow small strike forces to travel on foot or potentially allow vehicles into their doorways.[5b] Incorporated into the hull of a Craftworld is a Nexus of Webway Gates that connects them to the Webway network.[11] Storm Serpents have access to portable portal generators that power a Wraithgate thus allowing Eldar forces to travel directly onto the battlefield.[7]

The Dark Eldar make use of mobile portals that link their forces by way of the Webway.[6]

The parts of the network are also infested by the wasp-like, psychic predators known as the Psychneuein.[5b]

The Necrons are known to make use of the Webway as they are a species that are deprived of psykers. Without the Webway, they would be forced to rely on slow moving stasis-ships which would doom them to isolation.[1b]

Despite the level of protection in their doorways, Daemons are known to find the Webway an easy path of entry into a Craftworld.[3]

The Emperor of Mankind created a doorway into the Webway and linked it to the greater network. However, because the Golden Throne was not constructed of psychically resistant material, the Emperor had to use his own powers to protect the human-built portions from the dangers of the Warp.[8]