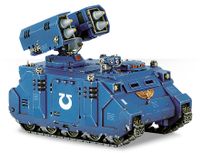 The Whirlwind multiple missile launcher is mounted on the Space Marine Whirlwind vehicle. It is capable of firing various types of missiles, the most common types being the standard Vengeance missile or Incendiary Castellan missile. The Whirlwind can be loaded with multiple types of munitions, but can only launch one type at a time. The most current versions of the launcher, are either 2 pods of 5 missiles each, fired in tandem pairs, or larger missiles fired one at a time from 2 pods of 2 missiles each.[Needs Citation]

Vengeance missiles are the standard warheads used by the Whirlwind. The Vengeance missile is a high explosive missile containing a proximity fuse, which detonates the missile close to the target, scattering deadly shrapnel over the entire area.[Needs Citation]

Castellan missiles are defensive missiles, which upon detonating, scatter mines over a large area. They are often effective for denying an enemy an easy route for counter attacks. Sufficient mines are fired in each shot that the field will remain until the end of the battle.[1]

Incendiary Castellan missiles are missiles that have exchanged the fragmentation charge for a volatile chemical warhead that blankets the blast area in searing flames. It is commonly used on targets inside structures which are protected from fragmentation blast. Even the most sturdy of defences provide no protection and if by some chance the defenders inside the structure aren't burned to death, most die from the after vapours which kill them from the inside out.[2]