The White Consuls are a Successor Chapter of the Ultramarines Legion[2], and are one of the Astartes Praeses Chapters[9] which, according to the ancient tome Mythos Angelica Mortis, were created to guard the Eye of Terror[1].

Their colour scheme is the reverse of the Ultramarines', replacing the blue with the white and vice-versa, although the shoulder trim still displays the company colour as per Codex Astartes dictate.[2] As one of the Ultramarines successors located farthest from Ultramar, it is rare and a cause for celebration when the White Consuls appear in the court of Marneus Calgar.[6]

Unusually the White Consuls have two Chapter Masters; one oversees the defences of the Chapter's home world of Sabatine and commands a standing force ready at a moment’s notice to respond to Chaos incursions through the Cadian Gate, and the other is responsible for the operations of the Chapter's forces in war zones further afield. It is doubtful that this is sanctioned by any entry in the Codex Astartes, and the reason it has never been challenged is the Chapter's homeworld's distance from Ultramar.[6] Also unusually the White Consuls seem to worship the Emperor as a god and seem to be part of the Imperial Cult, unlike most other Astartes Chapters.[5c]

The White Consuls maintain sovereignty over several nearby systems, and the chapter officers are expected to oversee the administration of each world before advancing to a higher rank. As such, these officers are often found in command of local troops. This is considered as a smaller version of the Ultramarines' practices within Ultramar.[6] One of these was the Boros System, which they ruled from the star fort Kronos (the largest space station in Segmentum Obscurus), until the entire system was corrupted and the star fort destroyed by the dark crusade of the Word Bearers and the subsequent invasion of the Necrons, under the Undying One. Proconsul Cassius Ostorius & Coadjutor Gaius Aquilius seemed to be the only two Astartes involved with the governorship, however.[5a]

Every battle brother has to serve as a Coadjutor in the years after rising from the rank of neophyte. A selection of veterans are also chosen to act as Proconsuls; becoming a Proconsul is a necessary prerequisite to becoming a sergeant or captain.[5a] Proconsuls have led local troops of Sabatine or their vassal worlds into battle, granting them some knowledge on the Imperial Guard.[6]

When the Thirteenth Black Crusade started, the White Counsuls answered to call of Cadia by sending all of their Companies, except the Fourth, who were left as a skeletal guard of the planet Celestine.[14a]

In the aftermath of the Great Rift's creation, during the Thirteenth Black Crusade, the Chapter's Homeworld was overrun by the forces of Chaos; though the remnants of the Chapter managed to escape[10] before Sabatine was corrupted by the forces of Nurgle.[14c] The Chapter now seeks out a new world to claim as their own and rebuild.[18]

The White Consuls are known to possess three battle barges, Sword of Truth, Divine Splendour and the Righteous Fury.[5b] They are also known to possess several strike cruisers including, the Hermes, Hero of Sabatine, and the Eternal Faith.[3][12][20] 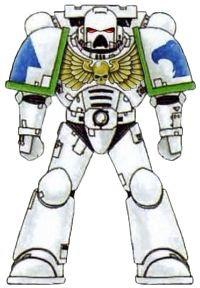