White Dwarf is Games Workshop's monthly magazine. It is produced in a number of countries, with the U.K. being considered the "mother" magazine. 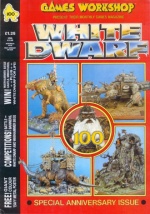 White Dwarf began as a bi-monthly magazine covering roleplaying games like Dungeons & Dragons. Its first issue, June/July 1977, introduces its subject to the various types of roleplaying companies and different companies that produce miniatures. Its editor, Ian Livingstone begins the magazine by describing the creation of roleplaying games and how there are over fifty games, with ten miniature production companies, spanning many different ideas and concepts at the time.

The original publisher was the Pentagon Printing Group and they produced the magazine for Games Workshop. It was later, when Games Workshop started producing miniatures for their own game and branched off completely from the Dungeons & Dragons format, that White Dwarf became a monthly magazine devoted just to Games Workshop products.

When Games Workshop's products took over, White Dwarf was turned into a magazine and a "catalog". The "catalog" section featured new miniatures that were released by Games Workshop/Citadel Miniatures and even had a place where they could be ordered. It was with this incarnation that White Dwarf became a true Games Workshop-only magazine. This was fully expanded beyond miniatures in the 90s to include the new releases of Black Library, the literary publisher for Games Workshop. From then on, short stories and other literary works played an important role in articles.

Later, when Games Workshop bought the license to produce miniatures for the Lord of the Rings series, White Dwarf expanded. It was the first time in over 200 issues that a non-Games Workshop concept would be featured in the magazine.

There are many standard feature articles for Warhammer 40,000:

You can read the first issue of White Dwarf (no Warhammer 40k content, but surely an historical release!) here.

The edition is divided into a number of sections; Age of Sigmar, Warhammer 40,000, The Lord of the Rings, Hobby, and Frontline. While the first three sections are self-evident, Hobby is dedicated to the hobby community, painting and hobby advice; Frontline also contains a list of all hobby centers and independent stockists, an events calendar and miniatures available to order. The current U.K. Editor is Mark Latham. There is an official database of White Dwarf (from issue #100 onwards) available on the Games Workshop website at Games Workshop Database.

The magazine covers Warhammer (Age of Sigmar), Warhammer 40,000 (40k), and Lord of the Rings. It also has articles on the hobby aspect of the games (modeling, painting, etc.). Current editor for the U.S. edition is Guy Haley. While the U.S. version has many articles in common with the U.K. edition, it often will also have U.S.-only sections by the U.S. White Dwarf and web teams.

The cover art is different from UK and US editions.

Also note that the U.S. White Dwarf edition numbers are one behind their U.K. counterparts.

White Dwarf has been issued and translated in many different countries. Some dates are reported to give you an idea of when it started in each country and how many numbers are available today.

In the following page you will find a list White Dwarf issues, all in one page, that contain 40k material, in particular: