Wolf Guard, known as Varagyr[8] or Huscarls[10] in Fenrisian, are the veteran elite of the Space Wolves. 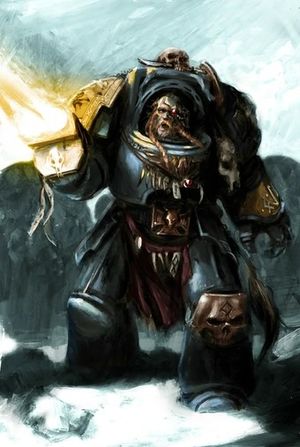 The Wolf Guard are the greatest warriors of any one of the Space Wolves Great Companies. It is their duty to lead packs into battle or provide a body guard to important members of the chapter on the battlefield, especially as the Wolf Lord. They are also often the leaders of squads, imparting their knowledge and experience on their younger charges.[1][2] Unlike other chapters, age is not the main route into the Wolf Guard. Progress is generally dependent on bravery and heroism.[1] To enable them to perform their role properly, the Wolf Guard have access to the best equipment that the Great Company has to offer, including suits of Terminator armour.[1]

Other than earning the respect of the Wolf Lord of their respective Great Company, there are no specific criteria for the elevation to the ranks of the Wolf Guard. Battlefield skill and heroics are the most likely way to receive a promotion, but saving the life of the Wolf Lord during battle is another sure way. Wolf Guards themselves fight with the weapons at which they excel and no specific protocol is required. Some will favour the wargear they used in their former roles as Blood Claws, Grey Hunters, and Long Fangs, but there are few who can turn down the lure of raw power afforded by Terminator Armour.[3a] Thus Wolf Guards are most commonly equipped with Terminator-class weapons such as Storm Bolters, Power Weapons, Lightning Claws, Assault Cannons, Heavy Flamers, and Cyclone Missile Launchers.[3b]

Great Wolf Logan Grimnar's Wolf Guard is so large that is is split into several smaller packs. However collectively, they are known as the Kingsguard.[4a]

The Wolf Guards can be cladded either in Power Armour[6] or in Terminator Armour.[7]

It is not only as bodyguards that Wolf Guard excel, but also as mentors for younger members of the Chapter due to their battle experience and raw talent. As such, Wolf Guard who are especially charismatic but also domineering are assigned to lead packs of Battle-Brothers, guiding them in the finer arts of war. The most heroic Wolf Guard, typically those judged by their Wolf Lord as born to command, are sometimes assigned control of an entire strike force as a Wolf Guard Battle Leader. Should a Battle Leader prove himself capable of excelling above and beyond expectations, he may find himself next in line as Wolf Lord. Many of these Battle Leaders are now also Primaris Marines.[3a][13]

Void Claws are Logan Grimnar’s favored boarding troops for space battles, their fearsome wolf claws deadly in the close quarters of ship corridors and chambers. Those Wolf Guard that choose this way of war favor close combat even more than many of their brothers, and revel in the fierce joy of sinking their claws into their foes’ flesh. They are led by Torfin Daggerfist.[4b]

Recently, the Wolf Guard has inducted the Chapter’s Primaris Bladeguard Veterans into their ranks.[13]