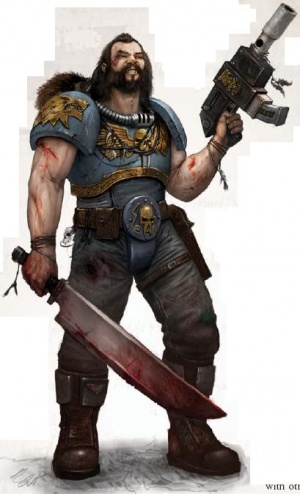 Wolf Scouts are the Space Wolves equivalent to the Scouts of other Space Marine Chapters.[1a]

They operate as Scouts do in a Codex chapter, working behind the enemy lines to disrupt communications and assassinate enemy leaders. They also track down and spy on enemy forces as well as coordinating and participating in surprise attacks.[1a] Some Wolf Scouts have been known to operate behind enemy lines for years at a time.[3]

In a typical Codex chapter, Scouts are Neophytes who have just been inducted into the chapter and are expected to receive their first taste of battlefield experience using the lighter armour and weaponry suited for reconaissance and stealth missions.[1a] By contrast, a Wolf Scout is already an experienced Marine, usually drawn from the ranks of the Grey Hunters.[1a] They are often solitary and brooding by nature, unsuited to the camraderie found in a typical Wolf Pack, and never happier than when roaming the wilds of the battlefield alone. Although the Wolf Priests often note this quality about them from the earliest days of their acceptance to the chapter, they must still complete their service with the Blood Claws and Grey Hunters, in order to become experienced enough to be entrusted with independence.[1a]

Rather then serve in a conventional pack he is placed under the command of a Wolf Priest who will appoint a Sergeant to train him in the skills he will need to operate effectively in his new role. They are then led by these Sergeants in battle. All of the scouts live together in a great hall in the Fang. Space Wolf Scouts are not assigned to any of the Great Companies. They instead answer directly to the Great Wolf and are under his sole command unless assigned to a Wolf Lord and his company on an-as needed basis.[3]

Since the introduction of Primaris Space Marines into the Space Wolves under Logan Grimnar have sought to combine these new warriors and their tactics with the ancient customs of Fenris. To that end, Wolf Scouts have taken up the role of Eliminators.[5]

Scouts are equipped with Scout armour, and their standard weapons include Bolt pistols and enormous combat knives. Since they are expected to have to engage a wide variety of targets, they may also be issued with rare and priceless plasma pistols and power weapons, as well as frag and krak grenades or melta bombs.[1a][1b]

When deployed as a squad, up to one Scout in the squad may be issued with a Flamer, Heavy bolter, Melta gun, Missile launcher, or Plasma gun.[1b]