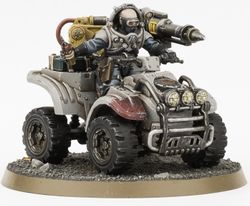 The Wolfquad is an Imperial four-wheeled Atalan-class exploratory machine and is often used as an outrider by Genestealer Cults' Atalan Jackals.[1]

Wolfquads are built by the Departmento Munitorum mining corps to work for decades and even centuries. These rugged machines have a robust frame and shock-absorbing suspension array. Its engine can run on multiple fuel tools and can mount heavy loads. Wolfquads are heavier than their Dirtcycle cousins, allowing them to wield Mining Lasers, Seismic Cannons, and Atalan Incinerators. Like the Lasgun these vehicles are cheap and easy to manufacture. In this role they are valued when captured by Genestealer Cults posing as miners or workers.[2]