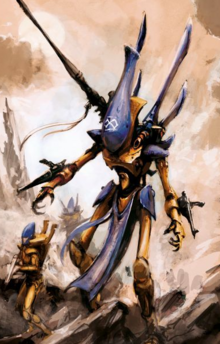 Wraithlords (also known as Iron Knights, Wraith-Giants and Eldar Dreadnoughts)[3] are giant Wraith-constructs made of wraithbone and inhabited by the souls of dead Eldar heroes. Towering far above their still-living brethren, the Wraithlord is a force to be reckoned with. Only the most capable warriors of the Craftworlds are encased inside them. They can be armed with a myriad of weapons, including close combat, short ranged and long ranged weaponry with the ability to smash most enemies in combat. 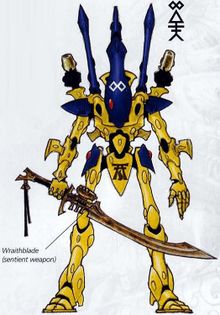 The creation of a Wraithlord involves empowering an Eldar Spirit Stone with the proper soul of an Eldar, plucked from the Infinity Circuit. The soul is then placed into the forehead of a Wraithlord chassis.[2] Should the Wraithlord fall in battle, the Spirit Stone will be recovered and either be placed onto another Wraith construct, or be returned to the Infinity Circuit. Despite the fact that the Wraithlord exists in the real world, the spirit which controls it is never able to be as alert as those still alive, inhabiting a dimension both in the 'real' world and the warp at the same time. This phenomenon is known as 'Wraithsight', and can affect the Wraithlord in battle by making them slower to act and occasionally stopping them from acting at all.[1a] As a result, a Spiritseer must remain in close proximity to Wraith constructs in order to guide their actions.[1b]

Standard Wraithlord equipment include two Power fists, with flamers or Shuriken Cannons attached to the side. In addition, some Wraithlords are equipped with heavy armaments such as Scatter Lasers, missile launchers, Bright Lances and starcannons. Weaponry is often chosen to complement the soul of the spirit controlling the Wraithlord, as their predisposition towards different types of combat follows them beyond death - those who favoured close combat will still attempt to tear their enemies limb from limb or cleave foes with a massive Ghostglaive.[7]

Eldar Dreadnoughts
Eldar Dreadnoughts first appeared in White Dwarf 100 (UK), may 1988, pg.2. They are presented alongside Imperium and Orks Dreadnoughts. It is mentioned that Eldar craftsmen operate these machines trough "mind-impulse link", allowing them to control the dreadnoughts as if they were their own bodies.[9]

Spirit-Warrior
Dreadnoughts were joined a month later White Dwarf 101 (UK), june 1988, pg 2, by the Spirit-Warrior, a.k by its commercial name : Eldar War Robot. Similar in design to Eldar Dreadnoughts, the main difference is that they are controlled by an Infinity Circuit rather than a pilot, and they can use Psychic Power if the transferred Eldar spirit is that of a Seer[10]