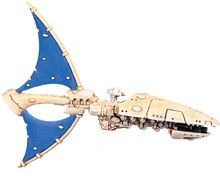 Eldar Wraithships are a type of Eldar vessel.

Wraithships are formed out of pure wraithbone drawn from the warp. The core is forged out of this material and into it is connected all the systems of the ship as well as being psychically attuned to the frequencies used by the Eldar. This psychic connection allows instant communication and turns the ship almost into a living being in its own right. The outer shell of the ship is also grown and designed to form bulkheads, doors and other physical designs. The wraithbone is forged by a class of Eldar known as Bonesingers, using their psychic powers to mould the growth of the wraithbone into the forms they desire.[1]

The pilots and crewmen of these vessels are attuned to the running of the ship and can literally feel the design of the ship. To this end they can trim the sails to perfection to gain the most out of the solar energy the ship runs on. This also allows them to make the legendary manoeuvres which so often allow them to escape incoming fire or gain the best position to attack their enemies.[2] Wraithships are armed heavily with both a Weapons Battery and Pulsar Lance with either Eldar Torpedoes or Eldar Launch Bays with Nightwing Fighters and Phoenix Bombers.[2]

Equipped with Pulsar Lances and launch bays for Attack Craft.[3]

Equipped with Lascannon batteries and launch bays for Attack Craft.[3]