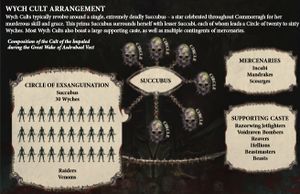 Organization of a typical Wych Cult

A Wych Cult is a self-governing organization that trains and employs coliseum fighters known as Wyches, or Hekatarii. The abilities of these fighters are often sought after by a Kabal, who will employ the warriors of a Cult to assist with raids when necessary.[1a]

Wych Cults of sufficient strength and numbers have been known to perform raids by themselves with marked success, although occurrences of this are significantly less common than a Kabal performing a raid due to the high mortality rate of Cult members. These raids are also means to give other Dark Eldar a chance to fight alongside the Cult, for a price.[1a]

Wych Cults evolved from the thirst for blood that the Dark Eldar have. The society of Commorragh would be at a loss if it wasn't for the nightly displays of violence performed by the Hekatarii. Wych Cults operate out of their own arenas, which are used both as means of staging their violent fights as well as to display the wealth and status of a Cult. Every arena has its own deadly charms and challenges, such as spinning blades, predatory beasts, gravity-wells, kinetic inversion snares or even more esoteric and inventive hazards. A Wych Cult member is obsessed with honing their skills in hand to hand combat, but there are other areas of interest as well. Some wyches may choose to train in the use of Reaver Jetbikes won or stolen on the arena, since many Cults include toroid racing tracks.[1b]

Some Cults also host a nomadic band of Beastmasters, a male-dominated offshoot of the largely female Wyches. They remain distant and aside from the rest of the Cult, but sometimes have their own arena complex within a Cult from where they emerge every few nights to showcase their newest pets. Many Cults also maintain close relations with gangs of Hellions for beneficial contracts. The Hellion gangs can offer their members for sport in the arena or in a realspace raid. In return, they gain protection against rival gangs as well as a source of combat drugs.[1b] The fighters of a Cult train constantly with each other, and they are expected to kill their opponents if possible. In this way, the weakest members are very quickly weeded out, producing only the best warriors with which to represent the Cult.

Wych Cults don't usually have large enough numbers to perform their own raids, so they work as mercenaries for Kabals, lending them their strength in exchange for slaves, the currency of Commorragh. The coliseum puts on fights regularly as an exhibition of their talents, pitting Wyches against each other as well as groups of slaves, or even fearsome alien beasts collected during raids. In this way, they are able to advertise their skills to Kabals, and bring in more work.

Wych Cults have a simple hierarchical structure to their ranks, similarly to Kabals.

The chain of command for a standard Wych Cult is: