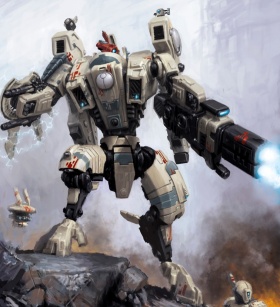 The pinnacle of Earth Caste battlesuit development, it stands twice the size of the XV8 Crisis Suit series. However, it nonetheless is an extremely agile and fast suit, being easily capable of outmaneuvering more crude Imperial walkers. Riptides are most commonly armed with a Heavy Burst Cannon or Ion Accelerator as well as Riptide Shield Generators, twin Smart Missile Systems, and twin Fusion Blasters or Plasma Rifles, giving firepower and protection to compliment their agility. The Riptide draws power from two primary energy sources. The first, the Fusion Reactor, is the standard and more reliable method of energy. However the Riptide is also equipped with a Nova Reactor, an experimental dark matter energy source that is only activated should the Riptide's Shas'vre pilot require a burst of extra power.[2] It proves itself as not much reliable but very powerful reactor, completely eclipse the past failures, when early protoypes of Riptides without nova reactors were too ponderous machines or else dangerously unstable.[4a]

The XV104 was first unleashed during the Third Sphere of Expansion at the Battle of Mu'gulath Bay. There, thanks to their maneuverability, advanced weaponry, and armor, the newly deployed Riptides were effective in countering cumbersome Imperial heavy tanks and static entrenched positions. However production of the Riptide has proven slow - the materials for the dense nanocrystaline alloy armor are difficult to obtain and the sheer volume required ensures that the XV104 is a rare commodity. As a result, only experienced XV8 Bodyguards are granted the high honor of piloting a Riptide.[3]