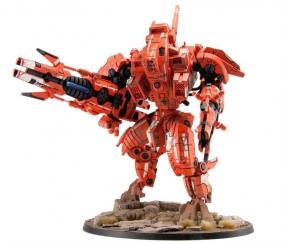 The XV107 R'varna Battlesuit is an advanced Tau Battlesuit design. A development of the XV104 Riptide, it sacrifices mobility for heavier armor and firepower in the form of two Pulse Submunition Cannons.[1]

The Earth Caste researchers of Ke'lshan were almost forced to abandon development of the R'varna due to its monumental cost. Instead, Fio'O Ke'lshan Sho'Aun turned to the Ethereal Council's demand for improved stealth and infiltration units, appropriating resources intended for the creation of a new Stealth Suit to the R'varna project. Renewed Tyranid attacks against the Ke'lshan Sept eventually revealed O'Sho'aun's deception to the Council, as the trio of R'varna prototypes held back the Tyranid horde at Ke'lshan's primary city.[1]