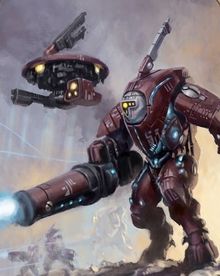 The XV25 Stealth Battlesuit is a type of Battlesuit used by the Tau.[2]

The XV25 Stealthsuit is a much larger version than the XV15, remarked as being broader than a Space Marine.[1] Their pilots are viewed as eccentric loners, operating either in single teams or as members of an Optimised Stealth Cadre.[2] The XV25 Stealthsuit first saw combat in the Kappa Mortis Incident and has since largely replaced the smaller XV15.[3] Like the XV15, it is equipped with all the standard battlesuit systems, including a burst cannon, jetpack and stealth field generator.[2a] It also incorporates a full medical suite, passive sensor arrays and nutrient reservoirs. Because of its support systems, Stealth Teams can call in reinforcements, command Drones to aid them in battle, or direct seeker missiles straight onto the targets.[8] Thanks to their larger frame and augmented muscles, XV25s can replace their burst cannon for a fusion gun, and may also take an additional Battlesuit support system. The team leader may also be equipped with a markerlight.[4a] However, the XV25 provides little protection against large-calibre small arms such as Astartes bolters.[1]

The XV25 was first deployed during the Third Sphere of Expansion, and has since supplanted the XV15 as the most common Stealth Suit design.[5] 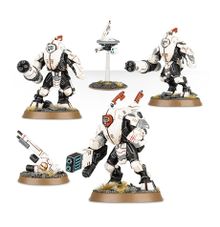