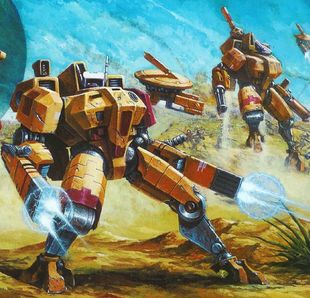 The XV8 Crisis Battlesuit is an advanced piece of Tau technology. These Battlesuits are issued to veteran Shas'ui Fire Warriors in order to provide the Tau military with a highly mobile weapons platform.[10] 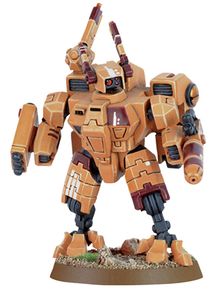 The XV8 is the standard-issue suit used by the Fire Caste, though other variants exist, the most common being the Broadside Battlesuit. Twice the size of a Fire Warrior[10], the Crisis suit is packed with advanced technology, including a jetpack, recoil absorbers, and targeting sensors.[2] Information gathered from the Crisis's sensor suite can be transmitted to command units, providing them with updated battlefield intelligence.[2] Nanocrystalline alloy armour is used, giving the suit superior protection while keeping weight to a minimum.[2] Although the armour provides superior protection against most small arms, it is no defence against heavier weapons, such assault cannons and lascannons, which penetrate right through.[4]

The suit also has three hardpoints that allow it to accept any combination of weaponry, support systems, and wargear.[1] 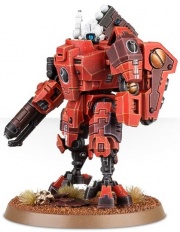 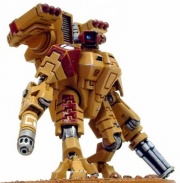 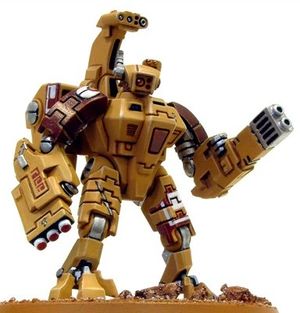 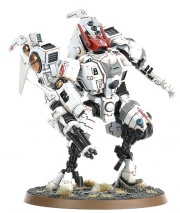 The most common variant of the XV8, the XV88 Broadside Battlesuit replaces the XV8's jetpack with heavier armour and twin-linked Railguns. 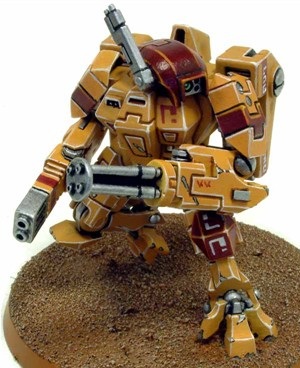