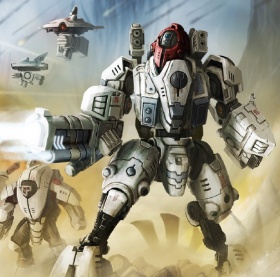 The XV95 Ghostkeel is a large Tau Stealth Battlesuit.[1a]

The XV95 was developed at J'kavo Station on the fringes of N'dras[1b] during the beginnings of the Third Sphere of Expansion. The program was launched on the orders of Aun'va himself. The XV95's first missions were highly covert in nature and included sabotaging Vadenfall Station and the assassination of Cardinal Bocsh. Its reputation soon led to its nickname, the 'Ghost of N'dras'. Soon enough the demand for XV95's increased exponentially and they began to operate openly on the battlefield.[2]

Each XV95 stands more than three times the height of the Space Marine and shares a similar design to the XV22 Battlesuit worn by Commander Shadowsun. Nigh undetectable thanks to its overlapping stealth fields generated by its Stealth Drones (with which the pilot forms an unnaturally strong bond while on extended missions behind enemy lines) and seemingly appearing out of nowhere thanks to a vast array of countermeasures, the XV95 will unleash a torrent of heavy firepower before retreating back into the confusion and chaos of battle. Enemies that attempt to retaliate will find that they are unable to lock their weapons onto the Battlesuit due to its advanced electronic warfare suite, and the Ghostkeel is also capable of creating holographic decoys if it comes under attack. The XV95 was primarily designed to operate behind enemy lines and spread panic and confusion. Indeed it is the epitome of the Tau war ideology known as the Mont'ka. [1a]

The XV95 bristles with weaponry that includes a Fusion Collider or Cyclic Ion Raker and twin Fusion Blasters.[1a]

The Ghostkeel's hand-picked Shas'vre pilot is supported by an integrated AI system that not only operates many of the suits more complex systems but also assesses his psychological well being. As Ghostkeel pilots are known to spend long periods in isolation behind enemy lines, many pilots form strong bonds with their suit's AI. Many pilots become so introverted that they shun physical interaction, preferring the company of their AI system.[2] 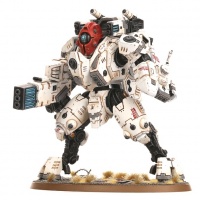