Xavier was born in the first decade of M41. He was apprenticed to the Salamanders in 009.M41 and was quickly judged worthy of induction into the Chapter. Xavier's initiation was officiated by Chaplain Hasdrubael, who must have been impressed with the young aspirant as Xavier was seconded to act as Hasdrubael's aide when he was raised to the position of battle-brother.[1]

Under Hasdrubael's tutelage, Xavier quickly learned the duties and responsibilities of a Chaplain. When Hasdrubael was slain during a raid on a Chaos Battleship, Xavier took command of the raiding party and launched a furious attack on the enemy ship.[1]

As a Chaplain Xavier quickly garnered a reputation as a powerful and inspiring orator and combat leader, but more than this he was renowned for his abilities as a teacher and mentor to his fellow marines. His wisdom was sought by many members of the chapter, from a newly inducted scout to the Chapter Master.[1]

A proud upholder of the Salamander's Promethean Cult, Xavier is said to have epitomised the Chapter's ideals more completely than any other Marine in their history. Dedicated to encouraging his fellows in feats of endurance and fortitude, it is said that when Xavier led them, the Salamanders never fell back before an enemy. As a sign of this dedication, he was entrusted with the keeping of "Vulkan's Sigil", a relic believed to have been carried by the Primarch Vulkan. He is also famed for having slain a particularly ancient and monstrous salamander with his bare hands.[2]

Chaplain Xavier was killed leading an attack on a Dark Eldar raiding force on the planet Drykeena. Mortally wounded by blades several times over, Xavier refused to fall and fought on until all his foes were lying dead around him. Only then did he allow himself to sink to the ground, where his wounds finally overcame him. His body was laid to rest on Nocturne and his name is still spoken with reverence by the Salamanders.[2]

The Horus Heresy Artbook Series depicts a Salamanders Chaplain entitled "Chaplain Xavier". As this is 10,000 years before the birth of the "current" Chaplain Xavier, it must be assumed that there have been two individuals with this name. The image of the Heresy-era Xavier can be found here.[3] 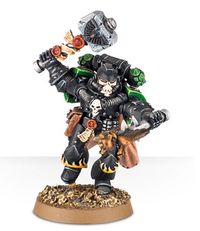