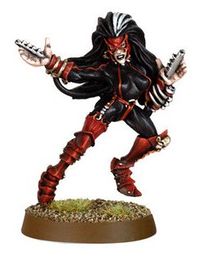 The Terrorfex is a wrist-mounted grenade launcher used by Dark Eldar infantry. The standard grenades used in conjunction with this device are Wraithbone grenades, but there are also Xenospasm Grenades, although these are incredibly difficult to make, and therefore quite rare to find in battle. Archon Kruellagh of the Kabal of the Flayed Skull uses special Damnation Grenades in her Terrorfex.

The Wraithbone Grenades launched by the Terrorfex go through a similar treatment process as the Soul-Seeker Ammunition, though where the Soul-Seeker rounds are treated to try and cause a maddening rage in the soul energy within, the Wraithbone grenades are treated so as to create an overwhelming sense of fear and despair. The grenades explode in the air above the target, releasing the soul energy in a haze that envelopes the target. The energies cause the same feelings to swell in the target, paralyzing them with fear or sadness.

These special grenades are made of specially carved obsidian, with fragments of Wraithbone impregnated into the rock. The soul energy in this Wraithbone is tortured in much the same way as the Soul-Seeker Wraithbone, and once the obsidian explodes in the air, the souls housed inside aim the obsidian fragments directly at the target, flensing them with every fragment, rather than the small fraction of shards that would result from a conventional Frag Grenade.[1]