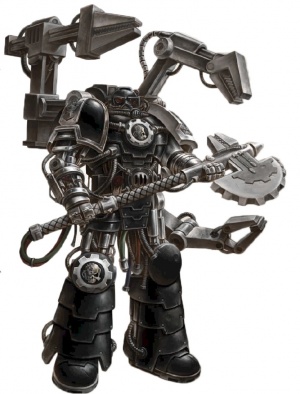 Master of the Forge Xerill[1]

Xerill is a Master of the Forge for the Deathwatch and a member of the Iron Hands.[1]

The concept of bionic enhancement and robotic integration has become deeply seated in the ways of the Iron Hands Chapter. Master of the Forge Xerill is a shining example of this belief and many consider him to be more machine than man. The Techmarine has served the Deathwatch for close to eight decades and in that time he has unlocked a number of secrets that have furthered the goals of the Dead Cabal. Xerill was inducted into their ranks fifty years ago after he recovered a series of Eldar Spirit Stones. His passion for understanding and unlocking the knowledge contained within xenos artifacts drew the attention of Inquisitor Ramaeus, who had him reassigned to permanent detail on the Dead Stations Vigil.[1]

Since that time, Xerill has embraced the Dead Cabal and has dedicated his tenure with the Deathwatch to studying as many xenos artifacts as he can. He is especially fascinated by anything relating to the Necrons and has undertaken many missions based on the slightest inclination that there could be Necron activity involved. Xerill finds the Necrons so intriguing due to their idealistic similarity to his own Chapter, and the inevitable fall they suffered as a result of that pursuit. This represents the ultimate danger in Iron Hands lore, and Xerill is anxious to understand how to avoid such grand disaster.[1]

Xerill has investigated many worlds of the Dark Pattern looking for Necron tombs and other signs. He has battled ancient remnants of their empire numerous times and he has become adept at overcoming their advanced technology and ancient science. On the world of Nunc, Xerill experienced something that would change his life drastically and put him at odds with his Deathwatch brethren should they ever learn the truth.[1]

The dead world of Nunc has long held many secrets that the Imperium wished to exploit. From the earliest days of the Dead Cabal and the encounters Inquisitor Sinclair experienced, this ancient world has often brought the Deathwatch to its surface. Xerill and a Kill-team of experienced Deathwatch Battle-Brothers came to Nunc in pursuit of a group of Eldar corsairs. These troublesome xenos were responsible for crippling at least three Imperial vessels, so the Deathwatch was dispatched to bring this menace to an end. After a fierce space battle, the surviving Eldar fled to the surface of Nunc hoping to elude their executioners. The Deathwatch does not leave a mission incomplete, however, and they followed the corsairs to the dead world to finish off the kill.[1]

During the prolonged firefight with the raiders, the Space Marines were pinned down in a rocky valley. Under covering fire, Xerill sought a way to circle around behind the Eldar to exploit their flank. While carrying this out, the excessive weight of the Techmarine’s artificer armour and servo harness caused a weak point in the rocks to collapse, dropping Xerill into an underground cave. The fall did little damage to the Techmarine, but he was cut off from his comrades and trapped deep below the surface.[1]

The cave that Xerill discovered was a natural formation, but it also contained many unnatural features. A large, metallic archway dominated one half of the cavern, a sealed door to something deep within the planet. The carvings and runes along the structure were instantly recognisable as Necron and Xerill quickly forgot about the raiders above. He began analysing and recording all the glyphs and runes he found, in hopes of discerning what rested beyond the doorway. While excavating the ground near the base of the arch to gain a better look at a series of glyphs, Xerill uncovered a strange silver box, seamless and perfectly cubical. Shortly after discovering this unknown device, the battle above continued to weaken the cave. Xerill knew that he must abandon his investigation or he would lose all that he had discovered should the cave collapse, burying him alive.[1]

The Master of the Forge quickly located another weakness in the cave and breached this into a side tunnel. This allowed him to return to the surface with his newfound prize and reunite with his teammates who had broken the xenos firing line and were making quick work of the remaining eldar. Xerill concealed the silver cube in his servo-harness until he could study the device further. Upon returning to Watch Fortress Erioch, Xerill sequestered himself away to devote his time to the artifact. After nearly a week of study, he was finally able to unlock it, though he has spoken to no one of what he found. He has recently begun sending a series of highly encrypted messages to his Chapter. These messages contain a great deal of research into robotics and also the basis of Necron physiology. He believes that out of anyone, the Chapter Council is best suited to understand the strides he has made in unlocking the secrets of transcending the flesh and becoming one with the machine. The leaders of the Iron Hands have entreated the Deathwatch to keep Xerill permanently assigned to his post within the Watch. To them, this is simply so that his valuable knowledge and expertise can be best utilised by the Imperium.[1]