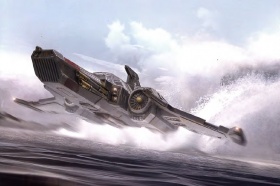 The Xiphon Pattern Interceptor was a fighter aircraft used by the Legiones Astartes during the Horus Heresy.

The origins of the fighter are long lost, but it shares similarities to the STC patterns with craft such as the Thunderbolt and Amhut Voyager. The design itself was brought into Imperial service in 806.M30 from the Rhadamanthys Enclave. The fighter's performance puts great stress on its pilot, something Space Marines were naturally able to withstand.[2]

Capable of both atmospheric and space flight, it carried two pairs of twin-lined Lascannons and a Xiphon Rotary Missile Launcher into battle. This firepower combined with the interceptor's speed and agility made it a deadly opponent.[1] However, the design was complex, had limited range, and was ill-favored by the Mechanicum, which preferred the larger Wrath fighter. Thus, by the end of the Great Crusade it had fallen out of frontline service in all Space Marine Legions except the Dark Angels and Ultramarines, though the demands of the Horus Heresy forced many Legions to press them into service once more.[2]

The Xiphon was a high-performance machine that required constant micro-management by its Astartes pilot to maintain equilibrium in the aircraft due to an engine system that was designed to operate both in the void and a wide variety of atmospheres. In addition, it was too lightweight and under-powered. This often frustrated Xiphon pilots, though they still appreciated its excellent turning speeds, agility, and touch responsive controls.[3]