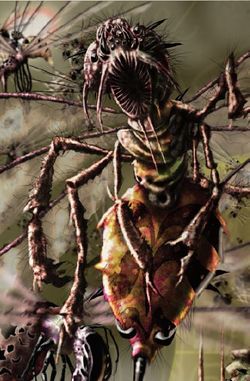 a close look of the alien vermin.[1a]

The Xothic Blood Locust is the subject of horror stories on agri–worlds throughout the Calixis Sector. First discovered by the reckless and foolish Rogue Trader Severthon Xoth in M39 on a planet just to spinward of the sector, the swarms slew most of the shore party. The survivors fled back to Xoth's ship, unknowingly carrying several caches of eggs aboard their shuttle. By the time Xoth realised his error and the Ordo Xenos quarantined the planet, the creatures had spread to several Calixis worlds.

Ordo Xenos named the creatures Xoth Blood Locust after executing the rogue trader for his mistake and due to a preference for blood in particular by the creatures. Even though blood is preferable, the blood locust swarms drain the fluids from any plant or animal they come across. On agri-worlds, large swarms have been known to decimate crops and cause massive famines. On planets with larger human populations, whole communities can be wiped out in a matter of hours. Worse, the creatures are known to lay eggs in grain and produce shipments, ready to hatch when they reach the next planet.

The Administratum has found standard pest control methods insufficient. Standard procedure calls for the requisition of Imperial Guard or PDF forces armed with flamers and Hellhound tanks to incinerate fields, forests, and even entire towns. In the case of truly massive swarms, some officials have turned to the awesome firepower of orbiting warships for localised bombardments. Thoroughness is essential, for it just takes one egg cluster for a swarm to grow anew.[1a]

Inquisitor Felroth Gelt on one of his adventures on the agri-world of Qrbel Quill encountered the locusts. Him and his Acolytes found a whole island off the main continent completely consumed by the swarms, they managed to escape only by the effort of Galvar Stern an ex-Guardsman who brought a boarding-flamer that drove the horde back long enough. After getting abroad the ship Felroth immediately ordered the entire island destroyed with precise lance strikes to ensure the swarms are utterly annihilated.[2b]