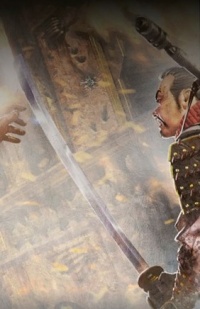 Yasu Nagasena was a Human agent of Malcador the Sigilite during the Horus Heresy.

An expert tracker and hunter who had served aboard the League of Black Ships, Nagasena was said to be the last descendant of an ancient order of Terran warriors. He was first dispatched with Imperial Army soldiers and Custodes to apprehend the Crusader Host on Terra after the events of Isstvan V.[1]

Afterwards, Nagasena was dispatched to chase down and assassinate Severian, the lone survivor of the Outcast Dead. The two came to blows, but were stopped by Malcador who instead chose Severian to become a member of the Knights-Errant.[2]

Yasu Nagasena was later part of a force sent by Malcador to Kamiti Sona in an attempt to retrieve a Shard of Magnus. Accompanied by Space Wolves and Dio Promus, Nagasena came to blows with the entourage of Ahriman, which had the same objective. Nagasena engaged in a fierce duel with Lucius, his mortal frame unable to best the Space Marine and his blade shattered. He nonetheless survived the duel and the battle against Ahriman's cabal. Nagasena continued to help lead the Imperial search party, accompanying them to Nikaea with a new sword forged by Promus. On Nikaea, the party was assailed by vast Daemonic hordes unleashed by the possessed Lemuel Gaumon, and after Dio Promus was badly wounded Nagasena defended his fallen comrade's dying body.[3a]

In battle, Yasu Nagasena wore specialized Carapace Armour built in the image of his ancestors ancient design. He wielded a master-crafted katana known as Shoujiki, which he treasured deeply. When the blade was broken in his fight against Lucius Nagasena was heartbroken to the point of losing his cool demeanor and giving the weapon a funeral-style goodbye ceremony.[3] Sensing his heartbroken state, Dio Promus used Shoujiki's steel to remake a new blade covered in Macraggian runes known as Aoshun.[3a]