Yggra'nya, the World Shaper, also known as the Moulder of Worlds[1a] and the Worldmaker[3d], is a C'tan Star God whose thoughts can break apart planets and reshape them into forms more pleasing to itself.[1a]

Prior to the Silent King's betrayal of the C'tan during the closing days of the War in Heaven, Yggra'nya was the patron deity of Borsis, the World Engine.[2] During the days when it still ruled Borsis it had manifested as a being with skin of multi-coloured flame. Its form then possessed several pairs of arms, each carrying a symbol of rulership: a sceptre, an orb, a sword, the jaw of a spacefaring beast. Topping its three-eyed face was a headdress of gold and deep blue.[3a] Borsis was one of many worlds Yggra'nya had Like other C'tan, it was shattered into C'tan Shards when the Silent King betrayed the Star Gods in the closing days of the War in Heaven.[4][1a]

In 912.M41, the Nephrekh Dynasty lords Turakhin and Heqiroth had overthrown the Magadha Dynasty Overlord upon the Crownworld of Borsis and activated the World Engine.[2] The World Engine, powered by a great shard of Yggra'nya traveled straight to Mars, destroying worlds in its path, with the intent of awakening the Dragon. Heqiroth had also stolen then living metal skin of Yggra'nya, declaring himself a god.[3d] During this time, the shard of Yggra'nya had mentally contacted Brother Ghazin of the Astral Knights, who were desperately battling the World Engine alongside other Chapters. Yggra'nya and Turakhin both assisted the Astral Knights for freedom and to bring down the now-mad Heqiroth, respectively.[3b] Yggra'nya appeared in a vision to Astral Knights Chief Librarian Hyalhi. It took on an emaciated form of grey matter, with a tattered headdress gold, dull oval eyes of crackled amber, and empty mounting for gemestones. It raged against the betrayal of the Necrons, believing there was no fault in what was offered to the Necrontyr. Yggra'nya offered to destroy Borsis, in exchange for assistance in freeing it. It claimed that it would simply leave the galaxy afterwards to find a more appreciative one.[3b] After destroying Borsis, it did indeed leave[3d], but Lord Inquisitor Quilven Rhaye had committed on a promise to the Chief Librarian to find and destroy Yggra’nya.[3e]

In 999.M41, during the Second Battle of Damnos, a shard of Yggra'nya was used against Imperial forces. as the Ultramarines under Chapter Master Marneus Calgar were being forced into stalemate by the Necron forces, a psychic communication from Chief Librarian Varro Tigurius had informed Calgar of the nature of the Tesseract Vault assailing Imperial forces. Ordering his forces to focus their fire upon the Tesseract Vault, a C'tan Shard of Yggra'nya had seen its bonds unleashed and proceeded to wreak havoc upon Necron forces, Imperial forces, and the world of Damnos itself.[1a] The shard of Yggra'nya opened vast chasms within the earth destroying much of the Necron and Imperial forces.[1b] With the tide turned against the Necrons, Ultramarines Second Company Captain Cato Sicarius hurled a vortex grenade at the shard of the World Shaper. Turning its horned head to leer upon Sicarius, the C'tan shard summoned a giant rocky fist from the earth to grasp Sicarius. Just as the fist began to close upon Sicarius, the vortex grenade detonated, sucking the C'tan Shard into the Warp.[1a] 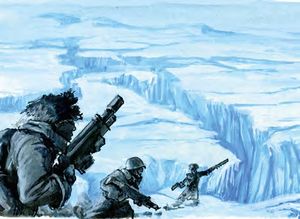