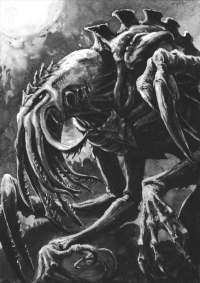 Ymgarl Genestealers are a mutated form of Genestealers originally thought to be native to the moons of planet Ymgarl, notable in that they are among the first contacts mankind has ever had with the Tyranid race.[1]

Ymgarl Genestealers were first encountered on the moons of Ymgarl long before the arrival of Hive Fleet Behemoth, wherefrom they occasionally spread on cargo barges to other worlds. They were thought to be autochtonous to the moons until they were encountered among the swarms and were revealed to be a Tyranid organism from the start.[1] Lying dormant in hiding, they consume anything that disturbs their hibernation. This is due to their unique ability of being able to alter their physical characteristics via a limited form of shapeshifting, the drawback being a greatly quickened metabolism which forces them to either feed almost constantly, hibernate in hiding or starve to death. They possess feeding tentacles instead of a maw, resembling those on the Lictor, which they use to suck their prey dry of blood, their only source of nourishment.[2]

Unlike any other Tyranid creature, the Ymgarl Genestealers are outcasts. The Hive Mind has no wish to reabsorb their genetic material in fear that the uncontrollable genetic instabilities that allow the Ymgarl Genestealers their formidable flesh-shaping abilities might contaminate the Tyranid gene-pool. Instead, they are abandoned on whatever planet they happen to be on, being forced to search for contact with the Hive Mind on other planets after the Hive Fleet has fed. They infiltrate the ships of any explorers and investigators unlucky enough to land on the prey planet after the Fleet's passing and spread in their instinctual need of being absorbed back to the Fleets, only to be abandoned again.[2]

The Hive Fleet of origin of the Ymgarl Genestealers is a mystery, as is whether they are capable of reproduction or remnants of the original creatures encountered on the moons of Ymgarl.[2] 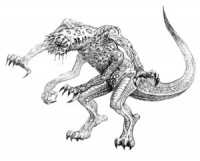 Ymgarl Genestealer as it first appeared[3]