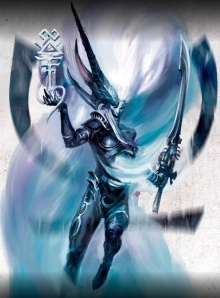 The Yncarne is the Avatar of the newly awakened Eldar God Ynnead.[1]

Yncarne was the first step to the Seventh Path, a method of awakening Ynnead without sacrificing the entire Eldar race. However, his birth required the sacrifice of many souls within Biel-Tan's Infinity Circuit. Nonetheless, the leader of the Ynnari, Yvraine, successfully undertook the ritual and Yncarne was able to save Biel-tan's remaining Infinity Circuit from The Masque. After its birth, Yncarne fought alongside the Ynnari on their quest for the Crone Swords.[2]

However, while on the way to Kalisus, the Ynnari were assailed by the Thousand Sons of Ahriman. Though successful in fighting off the Chaos Space Marines, Yncarne went missing after the battle.[2] He later reappeared defending Yvraine from Shalaxi Helbane during the Battle of Iathglas, summoned to the battlefield by the apparent death of The Visarch.[3] 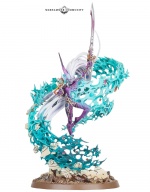