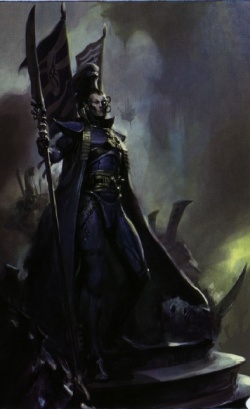 Prince Yriel is an Eldar Autarch of the Iyanden Craftworld, High Admiral of the Iyanden fleet, High Admiral of the Eldritch Raiders Corsair fleet, and is widely considered to be the greatest Eldar naval genius to have ever lived. When Iyanden was facing destruction at the hands of Hive Fleet Kraken, Yriel returned from self-imposed exile with his Eldritch Raiders to save the craftworld from becoming totally extinct.[1][2] Yriel is unusual in that he holds the position of Autarch without any notable experience in any of the Eldar Paths of War (which requires individuals to select an aspect of Khaine to follow). It is rather his experience in the Path of the Mariner which qualifies him for the position.[Needs Citation]

Yriel was born on Iyanden, but his bloodline is not purely Iyanden, and he is also the bastard descendant of the House of Ulthanash. Other than his unpure bloodline, Yriel is often considered to be greatly flawed for his sin of pride.[1]

Yriel demonstrated his tactical talent when Iyanden sent a fleet to eliminate Hive Fleet Naga in 810.M41. The commander of the fleet, Admiral Draech, was killed early in the battle when his flagship, the Auspicious Illumination of Eternity, was destroyed. A young Yriel, who was the fleet's second in command, quickly seized full control of the fleet and successfully lead Iyanden to victory. However at the same time, the defenders on the Exodite World of Halathel, the planet which the Eldar were trying to save from Naga, were slaughtered as their World Spirit shrine was overrun and destroyed by Tyranids. Yriel then became overwhelmed with rage and ordered his forces to scour all remaining life from Halathel.[3a]

In 919.M41 Yriel and Iyanden warriors made planetfall on the backwater planet of Yurk and eliminated the Ork Warboss, who was mustering Ork forces on the planet, along with all of the Warboss's ruling caste. Yriel then withdrew without having lost a single Eldar life.[5]

Over fifty years before Iyanden was attacked by Hive Fleet Kraken, Yriel was the High Admiral in charge of the Iyanden fleet and led Iyanden against the Chaos Lord Kallorax. Initially, Iyanden had been cautious to engage Kallorax despite Yriel's demands for action, but after the support of Chief Farseer Kelmon Firesight, Iyanden agreed to go to war.[6] Yriel went on to use hit-and-run and subterfuge tactics to disrupt the larger Chaos fleet, and scored a decisive victory over Kallorax at the Battle of Agrion. However later during the Battle of the Burning Moon, Yriel had stripped all of Iyanden's ship and interceptor squadron in his pursuit of the enemy. Thus when Kallorax's last surviving warship launched a Cyclonic Torpedo attack against the near-defenseless Craftworld, Iyanden was devastated and hundreds of thousands of Eldar died. Nonetheless, Yriel had defeated the Chaos Fleet and personally slain Kallorax during the battle. Thus he assured himself that his actions were sound and the sacrifices a necessary price.[6]

Upon returning Yriel expected to be honoured for his victory, but found himself instead stripped of rank for his recklessness in leaving the craftworld completely unprotected. Furious with indignation, Yriel took self-imposed exile from the craftworld and vowed he would never return. Many of his followers left with him and became Eldar Outcasts as Corsair pirates. Within a few decades, under his talented command, his Eldritch Raiders were the most feared Corsair fleet in the Galaxy.[1] The Imperium fostered rivalries between Yriel and other pirate companies which resulted in factional fighting; his conquest and absorption of two of these rival groups (Xian's Black Raiders and the Scarlet Command) made him the single most powerful Eldar pirate.[8]

When Hive Fleet Kraken invaded the galaxy, Iyanden was directly in its path and was too slow to outrun its advance. The craftworld's Farseers found themselves regretting the disappearance of their fleet's greatest asset. Word of Iyanden's situation managed to reach Yriel despite the psychic blockade around the craftworld caused by the Tyranid's Shadow in the Warp. As Iyanden was on the verge of annihilation, Yriel tempered his anger towards his former home and returned to aid his people. The arrival of Yriel and his fleet tipped the balance of the space combat towards the battered Eldar, and the reinforced Eldar fleet managed to destroy all the proceeding Tyranid waves before they could board and unleash their cargo upon the craftworld. Eventually, no more Tyranid ships came; the Hive Fleet had been destroyed.[1][2]

Yriel and his forces then landed on Iyanden itself to help clean up the invading creatures. Yriel set his eyes upon personally slaying the monstrous Hive Tyrant leading the Tyranid horde. But the creature was so powerful it could not be killed by mortal weaponry. Yriel, from a stasis field in the Shrine of Ulthanash, pulled the ancient Spear of Twilight and charged after the Hive Tyrant. As the Eldar lines were on the verge of being overrun, Yriel slaughtered his way through the Tyranid horde to the Tyrant and drove the spear into the monster's gaping maw and through the back of its skull. With the death of their Synapse leader, the Tyranid swarm was then easily defeated. But Yriel had doomed himself in the process, as the Spear of Twilight was cursed to eventually burn out the wielder's soul and once taken it could not be abandoned.[1][2][3b] Yriel had saved Iyanden, and was restored to Admiralship of Iyanden's fleet.[1]

Following the Battle of Duriel, Yuriel felt that his time had come and the Spear of Twilight had sapped the last of his strength. As he intended to return the weapon to Iyanden's Shrine and die in the process, he was stopped by the mysterious Shadowseer Sylandri Veilwalker who he had not seen since first taking the relic. The Shadowseer told the prince that his job was not yet done and showed him violent visions of what may be to come: Daemons loose among the stars and Eldar Gods reborn in glory. Yriel felt his soul grow strong againg or some unknown cause, and took up the Spear of Twilight once more to lead his people through these future trials.[6a]

In the closing days of the 41st Millennium, Iyanden was again invaded. This time, Space Hulks carrying the Daemonic legions of Gara’gugul’gor threatened the Craftworld. Iyanden was only saved thanks to the effort of Yriel and the newly arrived Ynnari. In the final stages of the battle, Yriel used the Spear of Twilight to destroy Gara’gugul’gor and his Space Hulk at the cost of his own life. However, shortly afterward his corpse was recovered and resurrected by Yvraine, who revealed that the Spear of Twilight was one of the lost Crone Swords. Much of the life stolen from him by the Spear has been returned, but his death has still only been forestalled.[7]

The Spear of Twilight, which Yriel took to save Iyanden, is said to contain the energies of a dying sun. It is no normal weapon and is now eternally bound to Yriel as it slowly consumes his soul. Yriel constantly battles to stop the weapon from consuming him and in order to protect himself has taken a personal forcefield which allays the worst of the spear's affects.[1] He is also armed with the Eye of Wrath, a monocular device covering his left eye capable of unleashing a tempest of lightning upon unfortunate foes.[1] 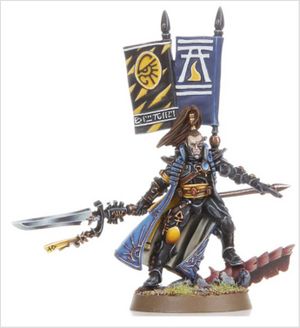