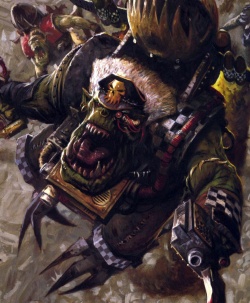 He leads a squad of Stormboyz called the Vulcha Squad. He has a famously bad temper and his squad are usually more scared of his temper than their enemies. His squad gets its name from his personal aircraft - an enormous red Fighta-Bommer called Da Vulcha.[1a]

After an unfortunate encounter with a Space Marine Dreadnought resulted in the loss of his legs, Zagstruk had Bionik replacements made, known as 'Da Vulcha's Klaws. Zagstruk's preferred method of attack is made all the more deadly by these sharp, heavy, metallic legs (which have much in common with an Ork Power Klaw). When he charges, he leaps feet first at his foe, driving his bionik legs into his victim with enough force to pulp bone and smash ceramite.[2]

At some point, Zagstruk and his Vulcha Squad were employed by Warlords from the Blood Axes when the Ork Empire of Octarius became infested with Genestealers. Even though they were successful in intercepting and destroying the infestation, a tendril of Hive Fleet Leviathan changed course towards the Genestealers' psychic signal and invaded the Empire.[1b]

Since the formation of the Great Rift, Zagstruk's ladz have noticed a distinct change in their Boss. While he has always been ambitious, he is now gathering more and more Stormboyz to his banner as well as Blood Axes and Goffs. He is intent on embarking on the Stormwaaaghs! to end all Stormwaaaghs!. Already he has conquered the Imperial Shrine World of St Rezmond's Hope and has remade it into his own image.[3] 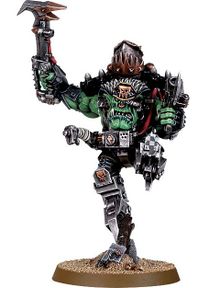