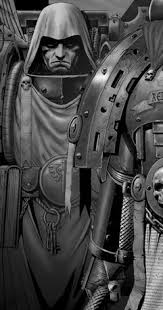 A native of Caliban in the period preceding the arrival of the Emperor, Zahariel left his home at the age of seven to attempt to join The Order, one of the bands of knights that acted to protect the population from the predations of the great Beasts indigenous to the world. The Order was a particularly prestigious knightly organization, being led by two warriors often claimed to be the greatest of the age; Luther and Lion El'Jonson. Accompanied by his cousin, Nemiel, Zahariel succeeded in becoming a supplicant to the Order, and began an intensive training programme that would occupy almost every moment of his waking life for the next two years. After being judged suitable by his Master, Remiel and by an initiation panel consisting of Lion El'Jonson, Luther and the Lord Cypher, Zahariel became a full member of the Order.[Needs Citation]

Only a year later, Zahariel took on a Beast Quest, the successful completion of which would guarantee him promotion of a full ranking Knight of the Order. This quest was one of vengeance, for Zahariel's mentor in the Order, Brother Amadis, had been slain by a Great Beast referred to as 'the Beast of Endriago'. Zahariel set out with this Beast as his target. During the Quest, he encountered apparent humanoid entities in the wilds, who warned him of pursuing his goal, but he pressed on and found the Beast, a great Calibanite Lion. While fighting for his life against the beast, Zaharial's latent psychic powers manifested, altering his time perception to the point he could see through the animal's defenses and find an opening, finally killing it using a secondary ability which allowed him to 'phase' his arm and pistol inside its chest, firing the bolts point blank into its heart. The Order recognized his amazing feat and promoted him to the status of knighthood. An additional result was that Zahariel gained a measure of respect and even friendship from Lion El'Jonson. The leader of the Order had a special sword crafted for Zahariel, made from a razor-sharp fang culled from the Beast. This 'lion-sword' would prove to be more potent in battle than most other blades.[Needs Citation]

Soon after his ascension to knighthood, the order declared war on the Knights of Lupus, a separate knightly order that had protested against Lion El'Jonson's genocidal campaign against the Beasts of Caliban. Zahariel fought in the short war as a member of a swordline, and came out of the campaign both blooded as a warrior and recognised as a rising star in the Order.[Needs Citation]

The Descent of Angels

When the Adeptus Astartes First Legion arrived on Caliban, Zahariel's destiny changed. Six months after his ascension to Knight of the Order, Zahariel once again faced the challenge of becoming something greater and achieving a more heroic purpose. Recognised now as the Primarch of the newly christened 'Dark Angels' Space Marines, Lion El'Jonson ordered that all members of the Order undergo selection tests to decide which of them could become Astartes. Zahariel and Nemiel both partook in these trials, and it was during one of the endurance tests that Zahariel's psychic powers again manifested, granting him a third power, that of renewed energy and stamina. This brought him to the attention of Brother-Librarian Israfael, who, after interrogating Zahariel, deduced that the young knight possessed a rare psychic ability known as Terrorsight. This ability gave Zahariel several powers: his perception of time could slow, allowing him to move faster than others could detect. He could 'phase' his body through the warp itself, becoming intangible. He possessed an 'x-ray' vision ability that could be used when otherwise completely blinded. Lastly, he could boost his own reserves of stamina and energy. (As far as is presently known, Zahariel has received no explicit training in the use of these powers, and their potentially extreme benefits have not been unlocked. All known uses of them have been instinctual and unfocused.)

Zahariel next came to the attention of a figure even greater than that of a powerful Space Marine Librarian when he was able to disrupt an assassination attempt upon the Emperor intended to be carried out by rogue knights of the Inner Circle. In the aftermath of these events, Zahariel was personally examined by the Emperor himself, but had his memory of their meeting, and the treason within the Order, suppressed. He was ultimately successful in becoming a Dark Angel, and again with Nemiel beside him, took his place in their ranks early on in the Great Crusade.

Assigned to the 22nd Chapter of the Dark Angels, Zahariel proved instrumental in the defeat of a warp-entity on the world of Sarosh. The entity, threatening to overwhelm the Dark Angel force (including Lion El'Jonson) was defeated by psychic assault, a group of the Legion's psykers led by Israfael winning the day. Zahariel actually played a role in saving the Lion's life, preventing a Saroshi attempt to detonate a powerful bomb on board the Dark Angel flagship. With the aid of Luther, Zahariel was able to eject the bomb from the ship before it exploded. During this incident, it became clear to Zahariel that Luther was an individual under significant psychological pressure. Despite his notable roles in the victory, immediately after the campaign was over Zahariel (along with Luther, Israfel and many others, but not Nemiel) was reassigned to training and garrison duties back on Caliban.[Needs Citation]

Now garrisoned on Caliban under Luther, Zahariel began to feel a tint of betrayal at the hands of his Primarch. 50 years went by, and at the onset of the Horus Heresy rebellion broke out across Caliban against the authority of Terra, spurred on by Terran-born bureaucrats who were in fact Chaos Cultists. Luther became convinced that Caliban would face destruction due to its Warp taint, and declared the planet independent from the Imperium. Zahariel vehemently disagreed with this course of action initially, but the more he learned of Caliban's dark past and its connection to the Warp, the more he agreed with Luther. Finally after defeating the cabal of Chaos Sorcerers and their walking dead with his own psychic abilities, Zahariel knew there would be no turning back for Caliban due to the Edict of Nikea and decided to join Luther in secession. Zahariel went on to become one of the first Fallen Angels.[1]

Later on Caliban, Zahariel was running through a collapsing tunnel before becoming buried beneath stones, left for dead by the Lord Cypher during an expedition. His mind drifted to the past about an old cave with a wizard before awakening again. Moving through an opening, he came upon the undead who he dispatched with his psychic powers, causing them to withdraw. He quickly looked for the worms that they battled when they fought the Ouroboros and found a psychic void that was growing that he determined was from the Ouroboros itself. With sudden realization that he was inside of the worm and cut off from his psychic power, he blacked out. Later when he finally returned from beneath Caliban, he was a changed man and insisted that the Ouroboros was Caliban itself and not an enemy. This brought him into conflict with the Lord Cypher who wished to maintain his influence over Luther. Later when he learned of the death of Nemiel at the hands of the Lion, Zahariel became embittered and this contributed to him leading a purge against a group of recently arrived loyalists on Caliban led by Belath. Afterwards through the power of the Ouroboros, he saw Cypher as a green man, a tree made man and embued with the essence of the forest. The two sides disputed the nature of the planet and the prison, and Zahariel accused the Watchers of bringing the Ouroboros there before forcing the away or he would unleash the Ouroboros. He then confronted Cypher, surprised at who it was before killing him. Zahariel was elevated by Luther as the new Lord Cypher.[2]

As a Knight of the Order