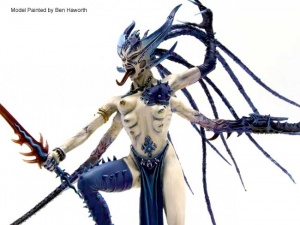 Zarakynel the Bringer of Torments, the Souleater, Unholy One and Angel of Despair is one of Slaanesh's most revered Keepers of Secrets. Summoned from the darkest depths of the human psyche given true form, she is the perfect mix of jealousy, sadistic pleasure and carnal desires, creating one of the Pleasure God’s most depraved and sadistic servants.[Needs Citation]

Zarakynel takes great pleasure in preying on the Eldar race, especially those from Exodite worlds. With her psychic powers, caressing talons and Daemonic sword, Souleater, she feasts on their Spirit Stones, condemning them to the eternal torture of Slaanesh.[2] At one point she had a run in with Iskandar Khayon, taking the life of his bloodward Nefertari. Before she could take Nefertari's soul, Khayon used his psychic powers to blast her into the warp. Even though she survived the encounter, it was more than a millennium before she could regain corporeal form. [3]

One of Zarakynel's most notable incursions into the mortal realm was on the Imperial planet of Sherilax, when a number of pleasure cults rose up in violent rebellion against the repressive Planetary Governor. The depraved cult members pleased Slaanesh greatly with their degenerate violence and he cast forth his Angel of Despair to aid in the overrunning of the Governor’s palace and the eventual corrupting of the entire planet.[1]