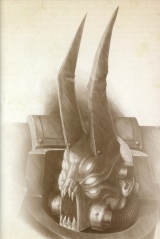 "I am a prophet of the gods. I am Horus’ servant. And I say to you, rejoice! The gods are coming here, to this world. They will bestow their power and their wisdom to any person strong and faithful enough to take it. Look upon me, and witness one of their champions. I swear to you that they will treat mercifully those who turn their backs upon the False Emperor. They will be kind to those who kneel to the righteous powers of this universe! This is my pledge! You will survive, you will prosper. You will know mastery of this realm, and glory in the next. This is their compact with me, and through me, with you."[4b]

Zardu Layak (real name unknown), also known as the Crimson Apostle, was a member of the Word Bearers during the Horus Heresy. During the Heresy he would rise to immense influence, becoming known as the left hand of Horus.[6a]

Born on an orbital plate above Terra, the boy that would become Zardu Layak lived among criminal monks that worshiped a myriad of artifacts and faiths they discovered in the more ancient regions of their orbiting platform. One day Warriors in Grey arrived and mercilessly massacred the monks. Layak was the only survivor, and after being found weeping before the destruction of religious artifacts was subsequently inducted into the Word Bearers.[2]

Layak went on to become an officer in the Ashen Circle, overseeing the burning of churches and temples in the Emperor's service during the Unification Wars.[1] 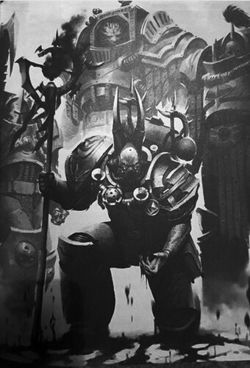 Zardu Layak with Perturabo, Typhus, and Abaddon during the Siege of Terra[6]

Following the legion's humiliation at the hands of the Emperor, Layak eagerly embraced the teaching of his Primarch Lorgar as well as those of Erebus and Kor Phaeron. However even these did not fill the void in him, and he soon began having visions of his Primarch speaking directly to him, telling him to not burn books but rather learn from and covet them and eventually discover the truth the Emperor had kept from his sons. Ashamed, he kept these visions from his comrades. Eventually he took a new name from the Book of Lorgar, was reborn as one of the Gal Vorbak, and became First Chaplain of the Chapter of the Ochre Gate, which after he corrupted its members became known as the Unspeaking. After his rebirth, Zardu Layak donned a daemonic helm chained directly to the flesh of his face and pledged to never let any but the Chaos Gods themselves see his face.[8] Layak went on to participate in the Battle of Calth[1] and replaced the roles of both Erebus and Argel Tal as Lorgar's closest confidant in the later stages of the Heresy.[2]

Following the Battle of Beta-Garmon, Horus ordered a general muster of traitor forces to Ullanor, something Lorgar had at first glance agreed to cooperate with. In truth, Lorgar had come to view Horus as weak and planned to dispose of him and take his place as Warmaster of Chaos. Using Layak and the oracle of Cyrene Valantion Actaea as part of his plan, Lorgar traveled with them into the Webway in hopes of finding Fulgrim. After confronting Fulgrim in the Palace of Slaanesh, Zardu Layak obeyed Lorgar's order to bind him with the newly elevated Daemon Prince's True Name. Zardu Layak had been given the name in a ritual led by Lorgar, but the total amnesia it would eventually give the user meant that the Primarch had put the burden on Layak instead. Layak effectively had Fulgrim under his own will, but at a great cost. However Layak secretly had doubts about Lorgar, expressing resentment at his enslavement by the Dark Powers.[2a]

At Ullanor, Lorgar's coup was undone when the Warmaster revealed he already knew of the treachery. In the end, Layak released Fulgrim from his bindings instead of having him attack Horus as Lorgar had originally planned. A defeated Lorgar was banished from Horus' site, but Layak and the 5,000 warriors of the Unspeaking pledged themselves to the Warmaster for the coming Siege of Terra. Layak later conversed with Actaea, revealing that he had already forgotten all of who he was before recent events. He also revealed that he knew Actaea was the one who had informed Horus of Lorgar's treachery. Furthermore, he had investigated Actaea's past into the Cult of Cyrene Valantion and found that nobody by that name ever existed. Layak asked just who or what exactly Actaea is, but she refused to answer.[2a]

Layak next appeared during the Solar War, leading Word Bearers forces under Abaddon's command. Inbued with a new fanaticism towards the Dark Gods, Layak expressed his eagerness to be a martyr for Chaos. He accompanied Abaddon during the boarding of the White Scars Battleship Lance of Heaven, saving the Sons of Horus First Captain's life from a powerful blast. Layak went on to storm Luna's Selenar gene-labs with Abaddon, battling through hordes of cybernetic monstrosities.[3] By the early stages of the Siege of Terra Layak was frequently seen at Horus' side inside Lupercal's Court and Abaddon blamed him for Horus' increasingly aloof state and enslavement to the Chaos Gods. However Abaddon was forbidden from killing the Dark Apostle, and his influence over Horus continued.[4a]

Layak became a key propaganda figure for the traitors during the Siege of Terra, his speeches declaring the injustices of Imperial society to Mutants, Abhumans, commoners, and Beastmen being constantly repeated within traitor vessels. Later alongside Magnus he aided in the Warp ritual that lessened the Emperor's psychic barrier on Terra that prevented the manifestation of Daemons. During the ritual Layak's appeared on an impermeable floating island of bone which rotated around the Imperial Palace. On his island Layak gave a rousing speech where he declared to the citizens of Terra that they would still be shown mercy if they joined Horus.[4b] Layak later confided to Abaddon that the Chaos Gods were rapidly burning out Horus' soul with their power, and that the Warmaster had little time left. He hinted to the First Captain that he knew of Abaddon's ultimate future as the next Chosen of Chaos.[4c]

Now known as the left hand of Horus, Layak and Abaddon were ordered to the surface of Terra during the battle for the Lion's Gate Spaceport.[6a] Together with Typhus, Layak summoned Cor'bax Utterblight in order to subvert Euphrati Keeler's Imperial Cult and weaken the Emperor's psychic shielding of the Palace.[6b] During the final stages of the battle for the Spaceport, Abaddon went against Layak's advice and attempted to rescue Kharn from Rogal Dorn. Knowing that the future Warmaster of Chaos must be saved, Layak confronted the Primarch himself. Though he held off Doorn for a time with his sorcery, Layak's blade slaves were slain and the Apostle himself was mortally wounded. Layak sent a message to Abaddon that this was always his destiny, and the First Captain would go on to greatly serve the Pantheon. As Layak died his body exploded in a blast of warp energy and all that was left was a crater and a portal that allowed the first Daemons to manifest on Terra.[6c]

Layak is now honored with statues alongside the likes of Argel Tal and Xaphen.[5] 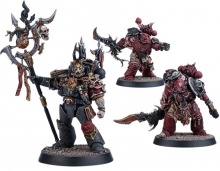