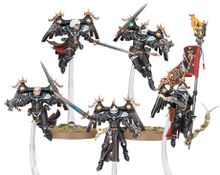 Zephyrim are a type of Jump Pack troop used by the Sisters of Battle specializing in melee combat.[1]

Only Sisters who experience a direct and persistant connection with the God-Emperor can become Zephyrim. Overwhelmed by this constant communion, they often lose the ability to converse with the other warriors of their Order. They speak in unknown words and exist in a state of unwavering rapture. Many amongst the Sisterhood believe that they speak prophecies that are intelligible only to those whose faith is able to decode the message. In battle they engage in vicious melees, dismembering the enemy with their Power Swords.[2]