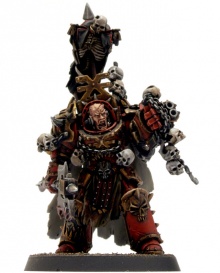 Zhufor the Impaler is the Chaos Lord of the Skulltakers, a powerful warband of the World Eaters Legion. He is also referred to as the Butcher of Vraks, following his participation in the siege of Vraks.[1c]

Originally, Zhufor was known as Balzach, a sergeant of the Storm Lords Chapter. During a battle against the World Eaters for the hives of Paramar, he was wounded and taken captive by the enemy. Balzach was drugged, tortured and underwent psycho-corrective surgery which rearranged his brainwave patterns. When his ordeal was over, he was reborn as Zhufor and joined the World Eater's ranks as a psychopathic Berzerker.[1c]

In the millennia after his fall to Chaos, Zhufor rose from a Berzerker to a Skull Champion and eventually an Exalted Champion of Khorne. He became the master of his own warband when he and his men attacked and subjugated an allied warband, the Skulltakers. Even as a Chaos Lord he wanted to further increase his power. To that end he sought the favour of Abaddon the Despoiler. He offered his service to the Despoiler in order to have access to his massive armouries. By doing so, he hoped to turn his warband into a mighty host.[1c]

Lord Zhufor led his Skulltakers during the siege of Vraks, aiding the Vraksian Renegade Militia and the forces of Chaos. His presence on the planet was part of Abaddon's long-term plan to disrupt the defences on worlds around the Eye of Terror.[1c]

He fought alongside the other Chaos forces on the planet and led his men to the front, rather than committing himself to a war of attrition. When the Imperial forces began to reclaim ground, Zhufor sought to take control of the war himself.[1c] He challenged and killed the Lord of the Berserkers of Skallathrax in a duel and absorbed the warband into his own. Then, he made a pact with the master daemonancers of the Sanctified. He would provide them with the means to summon the mighty Bloodthirster An'ggrath in return for their support. Having secured the aid of the Chaos Space Marines of Khorne, he turned his attention to the other Chaos forces. Zhufor's men attacked the Black Brethren of Eyreas and killed their Lord and Champions in a demonstration of power towards the other warbands and disposed of renegade-cardinal Xaphan as the symbolic leader of the Vraksian Renegade Militia in a bloody coup.[1a]

When the war had turned in favour of the Imperium, Zhufor and his warband fled the planet through the Vraks portal, which had been opened by the Sanctified.[1c]

Zhufor and his Skulltakers returned during Abaddon's 13th Black Crusade, fighting at the forefront of the conflict. So far, the Officio Assassinorum attempted to locate and eliminate him four times, but without success.[1b]

Zhufor is an ambitious devotee of Khorne, who believes that the Blood God has chosen him for great things. His accumulation of power and servitude to the Despoiler are just means to better serve his true master.[1c]

As a result of his treatment by the World Eaters, Zhufor possesses a massive stature, towering even over other Space Marines. He wears an ornate suit of Terminator armour in the colours of his legion. During the siege of Vraks, Zhufor mounted the body Commissar-General Maugh of the 143rd regiment on his armour as a gruesome trophy.[1c]

He is armed with a power axe and the Claw of Demnos, a power fist of ancient design with a built in combi bolter. The power fist once belonged to the Dark Apostle Demnos who died during the Scathak war. Zhufor, still a Skull Champion at the time, robbed it from Demnos' lifeless hand.[1c]