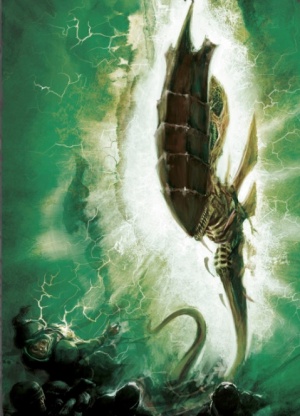 Zoanthropes are a species of Tyranid created solely to harness the potential psychic power of the Hive Mind, in effect a type of psychic artillery used in Tyranid planetary invasions and a synapse creature used to relay the commands of the Hive Mind to lesser creatures.[4]

Originally believed to be a mutant strain of Tyranid Warrior[1] due to the close physical resemblance, more recent encounters with the Zoanthrope strain have reported a different physical structure apparently engineered by the harvesting of lifeforms present in the path of the Hive Fleets. Various evidence points to these later incarnations of Zoanthropes being improved by Eldar DNA.[2] Zoanthropes have atrophied bodies and limbs supporting bloated heads so heavy they should snap their own necks under their weight - but, energised by psychic forces, they appear to overcome their mortal limitations and levitate, drifting over the battlefield.[4]

Despite their seeming frailty, Zoanthropes are lethal opponents. Zoanthropes possess batteries of psychic power they can use to both defend themselves by projecting a constant psychic barrier or launch assaults that are powerful enough to destroy enemy battle tanks, boil through adamantium plates, or even fell mighty Titans.[4] However, Zoanthropes are predisposed to sedentary behavior, a stance adopted to conserve their psychic power, when not in the presence of the Hive Mind.[3] They also care little for happenings beyond their immediate reach and prioritise their own survival above all else.[4]

Despite their power, however, Zoanthropes sometimes seem to be victims of their own massive energy reserves and there have been numerous afteraction reports of Zoanthropes “burning out” in battle. Their craniums have been observed to burst and bleed out, sending them crashing limply to the ground. Psykers who have witnessed these events liken it to the perils of the warp which normal psykers can suffer when psychic energy overloads their minds.[5]

Neurothropes are further evolved versions of the standard Zoanthrope. These alpha beasts have the ability to leech the very life force from their foes to power their attacks. There are some who belief the Neurothrope strain to be the progeny of the Doom of Malan'tai, which is a truly horrifying concept for all sentient races.[7]

Neurothropes can also use their parasitic power to heal nearby Zoanthropes, which helps to safeguard against the overload of psychic energy that commonly overwhelms these creatures. A combined host of these psychic bioforms is a formidable threat indeed.[8]