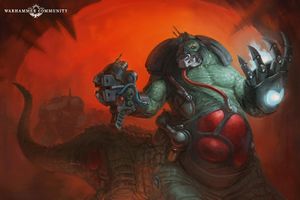 Zoat known as The Archivist[10]

Zoats are a centauroid, engineered slave race of the Tyranids, whose stocky build better enables them for ground combat[1] and their advanced intellect allow them to act as ambassadors.[4] Despite Zoats being bio-constructs of the Tyranids, should a Zoat somehow escape the influence of the the Hive Mind, it may escape or rebel against the Tyranids and pursue their own agendas.[1]

It was initially believed[17] that the Zoats were an engineered slave race of the Tyranids[1], known as bio-constructs[2]. Like other bio-constructs, such as the Genestealers and Grabber-Slashers, the Zoats were created to fulfill a particular purpose. In the case of the Zoats, it is to communicate with alien creatures so that they may act as ambassadors and information gatherers[2], and to generally subvert other species to bring them under Tyranid control.[6] Zoats are also speculated to have been created purely for combat, as their stocky builds easily enable them to perform under atmospheric conditions, unlike the space-faring Tyranids.[1] Zoats are probably an ancient strain of bio-construct, as their six-limbed structure is shared with Tyranids and Genestealers. Their form is likely derived from the native creatures of the lost Tyranid homeworld in whatever remote galaxy thy originated from.[5]

Although they are a slave race, Zoats occupy important positions within the Hive Fleets, with certain individuals gaining great power. However, Zoats are known to rebel against the Tyranids, though rarely. The rarity of these rebellions is due to the Tyranids secreting a special slave-hormone, which suppresses the Zoats' natural sense of independence. However, renegade Zoats do exist throughout the galaxy, either having broken away from the Hive Fleets, or become lost during scouting missions and have broken away from the influence of the Tyranid slave hormone.[1] Zoats who have broken away are able to develop independent civilizations and even strong psychic powers. Approximately half of renegade and independent Zoats will develop psychic powers. Independent Zoat civilizations are very diverse, with small groups isolated from each other on widely scattered planets.[1] Other Zoats may find themselves employed as mercenaries, however rare. Eldar pirates favour Zoat mercenaries, due to Eldar antipathy to Orks and due to finding humans irksome. These mercenary Zoats, whether abandoned or escaped by or from their Tyranid masters, have little choice but to fight for whoever pays best and complains least.[3]

Despite their brutish nature, they are a highly intelligent, technologically advanced species capable of manipulating other life forms through a combination of arcane devices and skilled subterfuge. If the Zoats are working to some inscrutable common agenda, the actions of each specimen keep any such plan a mystery; each appears to serve only their own ends. All that seems to link their actions is a recurrent interest in obtaining rare technological artefacts.[10]

The specially developed minds of the Zoats allow them communicate with alien creatures. Their minds are capable of tremendous leaps of logic and are capable of quickly mastering new languages, so that they better serve the purposes of the Tyranid Hive Mind.[4] Zoats are remarkably charismatic, being able to convey more meaning in a look or gesture than a native species can mange in a sentence.[6] The Zoats are completely independent-minded much like their Tyranid masters, however a special slave-hormone secreted by the Tyranids suppress the Zoats' natural sense of independence. This same hormone also suppresses the psychic talent that approximately half of Zoats may develop.[1]

Zoats are a highly intelligent and technologically advanced species, capable of manipulating other life forms through arcane devices and subtefuge. While the agenda and true nature of the Zoats remains inscrutable, the common link between their actions is their recurrent interest in obtaining technological artefacts.[10] Besides the technological artefacts they may acquire or craft, Zoats may also make use of Tyranid bio-weaponry.[1]

The Zoats rely on bio-technology to survive in diverse environments across the galaxy, using all manner of augmentations to support their metabolic and musculoskeletal systems. From atmospheric breather masks to synthetic organs that enable the digestion of alien proteins, these diverse enhancements are added to and upgraded throughout a Zoat’s long lifespan. Most terrifying of these technologies are the psychic resonators through which the Zoats communicate, allowing them to implant messages directly into the minds of others. Combined with their manipulative talents, these devices enable Zoats to install themselves as ambassadors, power brokers and data traders at the lawless frontiers of Imperial space. Even in places where Imperial authority is stronger, Zoats have been known to spread their influence by proxy, weaving webs of coercion until they have given themselves considerable power.[10]

A Zoat was encountered by a squad of Imperial Fists aboard a Tyranid Hive Ship of Hive Fleet Kraken. The Zoat attempted to persuade the Space Marines of the virtues of the Hive Mind and to impede their progress into the Hive Ship. When its attempt at subterfuge failed, it immediately charged the Imperial Fists squad before being killed.[16]

The Zoat-like Colossi of Hive Fleet Colossus were first reported to have have entered the Galaxy from the Eastern Fringe[13], and in late M38 was sighted in the Ultima Segmentum and as far into the galaxy as the Segmentum Tempestus.[11] Claiming to be escaped slaves of some unknown oppressor, these Colossi were unique in their ability to communicate telepathically and arm themselves with Tyranid weaponry, albiet with great pain. Due to their frequent contact with other alien races and their attempts to settle into Imperium space, the Colossi were declared Xenos Horribilis in the early 39th millennium.[11] The Colossi eventually turned upon Imperial forces and were supposedly destroyed in 226.M39 at the end of the Zorastra-Attilla Wars[8] or during the Helican Crusade, but there are rumours that it has risen once more.[12] In 897.M41, Space Wolves engaged this Hive Fleet as it attacked the civilized world of Thressiax.[14]

In M42, Zoats had been all but absent from the galaxy for generations.[15] However, a Zoat known as The Archivist appeared to Imperial agents aboard the space station Precipice, where its residents gathered for expeditions to the Seventh Blackstone Fortress. Presenting itself as a data trader, the Archivist offered to help quell a constantly shifting region of the Blackstone Fortress known as the Seethe. There, the Archivist identified an ancient Zoat spacecraft and an ancient Zoat relic known as the Grayl Intulia. Once it collected a large personal cache of artefacts, the Archivist abandoned its fellow explorers trapping them in the Blackstone Fortress. It now roams the galaxy as a free agent, salvaging relics amidst the anarchy in the age of the Great Rift.[10]

The Zorastra-Attilla Wars between the Colossi and the Imperium is likely alluding to Zoats, as the name of the war can be abbreviated to Zoat Wars.