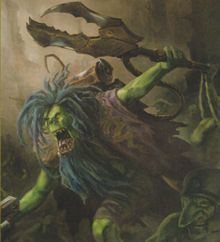 Zodgrod began his unusual career as a Slaver in Ugulhard Duffgruntas 'Chargerz', a reactionary tribe of Snakebites with a relatively high level of technology. It fell on Zodgrod to take charge of Snotlings destined for the Chargerz Shokk Attack Gun. Zodgrod managed to train his Snotlings to a high degree and before long his 'Kommando Runts' became famous in local greenskin circles.[1]

However, Zodgrod became fanatically protective of his simple-minded trainees, a situation that reached a bloody conclusion when Zodgrod lost his temper with the Mek who operated the unpredictable Shokk Attack Gun, an incident which resulted in the Mek being (fatally) fired through his own weapon. Zodgrod was banished from the Chargerz once battle was done, the Slaver's reckless actions nearly costing Duffgrunta's Orks their victory.[1]

Zodgrod went wandering throughout the galaxy, accompanied by his retinue of snotlings living as a Freebooter on the fringes of Ork Society. Somewhere on his travels he unearthed the philosophies of a Runtherd philosopher known only as 'Narflung'. Narflung had performed experiments with Gretchin, training them to become 'Super-Runts'. The techniques in question involved a great deal of bell ringing and the promise of a prime, juicy Squig. In no time at all Zodgrod had created his own Super-Runts, a new breed of Gretchin who outperformed their lesser brethren on the battlefield displaying increased aggression, cunning and bravery.[1]

Many, more traditionalist, Orks believe that these Super-Runts represent a threat to the delicate balance of Ork Society. Nevertheless, there are always desperate Warbosses reckless enough to hire Zodgrod and his 'elite' fighting force.[1]

Zodgrod's preposterous ideas that Grots aren't entirely useless have made him an outcast in much of Ork society, and he has since joined the Beast Snagga culture.[2]