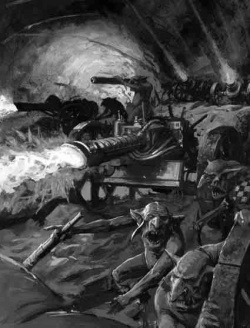 A Zzap Gun is a powerful yet unreliable energy cannon created by the Orks.

A Zzap Gun consists of a wire-bound tube and a powerful generator at the back end of it with a lot of custom 'gubbinz'. Although potent, its power is determined by the willpower of the grot firing the weapon, as its firing lever also electrocutes the Gretchin firing it. It represents the pinnacle of Ork technological advancement. An extremely powerful weapon, the Zzap gun serves a role not dissimilar to an Imperial Lascannon in that it fires concentrated beams of energy effective against vehicles. Although powerful, this weapon suffers from the common maladies of all Ork weapons and as such can vary to have such devastating power that it is stronger than anything in the Imperium, but some unlucky shots won't be strong enough to even scratch enemy armour. It is usually mounted on Ork Vehicles but sometimes is manned by Grots as a Big Gun.

Interested as to how the Orks were able to acquire such technology, the Imperium once monitored a Mekboy constructing a Zzap gun. Yet when he was interrogated, the Imperials found that the knowledge for creating it was innate to the Ork race. These weapons are currently considered Xeno-heresy by the Adeptus Mechanicus. Standing orders to Imperial troops are to destroy them when encountered.[1][2][3b]

The Big Zzappa is a heavier and more potent version of the Zzap Gun that shares its advantages, has longer range and is even more unpredictable when fired. It is mounted on heavier Ork vehicles such as Gunwagons, Big Trakks or Battle Fortresses.[3c]

The Supa-Zzap-Gun is monstrously huge and powerful version of Zzap Gun that can be mounted on Ork Gargants, Gunwagons, Gunfortresses or used as Soopa Gun.[7]

Even bigger versions of Zzap Gun are used on Ork spaceships. Put into batteries known as Zzap Kannonz they are similar to Imperial lance weaponry.[9]