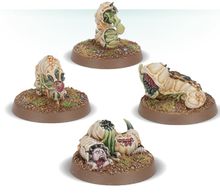 Sludge-Grub are maggots that have been mutated by the Nurgle Gellerpox plague, which has greatly increased their size and aggressiveness, as well as giving them fanged maws, stingers and acid spit. They are known to fight beside any creature that has also been infected by the Gellerpox plague.[1]

Swollen and grotesque, Sludge-Grubs slither from dank hiding places to batten onto their victims. Their fangs can deliver a nasty bite, but once attached the grubs are all but impossible to remove. It is dangerous to even try, for in bursting their soft bodies one risks splattering their acidic innards. The parasites can also spit small sticky globules of this acid short distances, allowing a pack of them to fell larger prey.[2]